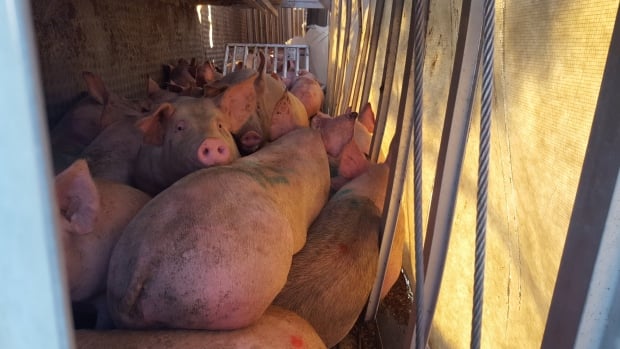 A dog suffering in a hot car will typically cause people to react with immediate action and outrage. They break windows, call the police, and the atrocity might even be documented on the news or social media, leading to floods of angry comments and demands that owners be punished. Today the act of locking an animal inside a hot car is widely condemned, considered dangerous, deadly and morally repugnant.

But what if that animal is not a dog, but rather a pig? And what if it is not a car, but a large metal transport truck? What if it is not one, but dozens of pigs crammed together, panting and suffering, after traveling up to 36 hours in the sweltering summer heat?

How do we feel then?

Last week, animal rights activists with Toronto Pig Save and The Light Movement shared footage and photos on social media allegedly recorded outside of a slaughterhouse in Burlington, Ont. The videos show pigs inside trucks breathing rapidly, some foaming at the mouth, some lying on their sides in obvious distress.

Environment Canada issued a heat warning for the region the day that footage was shot, with temperatures reaching 33 degrees Celsius in some areas.

But heat warnings don’t stop meat production. In Canada, there are no laws regarding temperatures above or below which farmed animals cannot be transported. Though the National Animal Care Council does have recommendations regarding transport of farmed animals in extreme weather, they are merely guidelines — not law — and are vaguely worded and rarely enforced.

This differs greatly from farmed animal transport standards in the European Union, which requires trucks be outfitted with forced ventilation systems that maintain a temperature range between five and 30 degrees Celsius, along with temperature-monitoring systems to alert drivers when limits are reached.

In Canada, where weather fluctuations are arguably more extreme, transport trucks typically employ simple open-air ventilation systems and are not required to have mechanical climate controls or monitoring.

There are also notable differences between Canadian regulations and those of other countries in terms of the lengths of time in which farmed animals can be in transport without food, water or rest.

In the EU, where advocates are currently fighting for even shorter times, cows can be transported for a maximum of 14 hours, pigs up to 24 hours and chickens for 12 hours. In the U.S., there is a law that limits all farmed animal transport to 28 hours.

In Canada, however, cows can be transported for up to 52 hours straight, and pigs and chickens for 40 hours.

An Ontario woman who gave water to a pigs in a truck headed for the slaughterhouse is on trial for mischief. A discussion on animal welfare with representatives from the humane society and the meat industry. 9:07

That these animals are enroute to their death is no justification for causing them such prolonged suffering: suffering that in no way fits into our general cultural view that animals — all animals — in Canada are to be treated humanely.

Jenny McQueen, a member of Toronto Pig Save, filed a complaint to the Canadian Food Inspection Agency regarding what her group observed and recorded last week, but says she is not confident much will come of it. “I’m used to filing complaints and having no action taken,” she says.

That’s because even though what is seen in the footage could technically be considered against the law, lack of enforcement is also a major problem. “Technically there’s a strong case that the law prohibits it, but in practice it happens every day and the laws go unenforced,” says Anna Pippus, a Canadian animal rights lawyer with Animal Justice.

Canada is known for having some of the worst animal transport standards in the Western world, and despite years of protest from animal advocates, it appears legislators are in no rush to update the 40-year-old regulations in order to protect animals from extreme weather. This is in spite of a 2015 poll conducted by NRG Research Group, which showed eight out of 10 Canadians agreed that animal-transport regulations should be updated to reduce animal suffering, including protection from extreme weather.

That means that as the hot summer sun continues to bear down on Canada, farmed animals in hot metal trucks will continue to suffer, day after day.

Canadians do have some power to elicit change within this system of cruelty — apart from lobbying legislators — by simply not contributing to the demand for these products. We can opt instead for plant-based proteins and meat alternatives, access to which has never been easier as vegan restaurants boom across the country. Even Canada’s largest distributor of packaged meat, Maple Leaf Foods, plans to extend its product line to include plant-based protein products.

While the sight of a dog locked in a hot car is sure to elicit strong public reaction, so too should these images of pigs suffering inside transport trucks. Though the majority of us may not want to know how the sausage is made, as Einstein once said, “Think occasionally of the suffering of which you spare yourself the sight.” These animals and the systematic cruelty they endure deserve our attention, our outrage and our action.