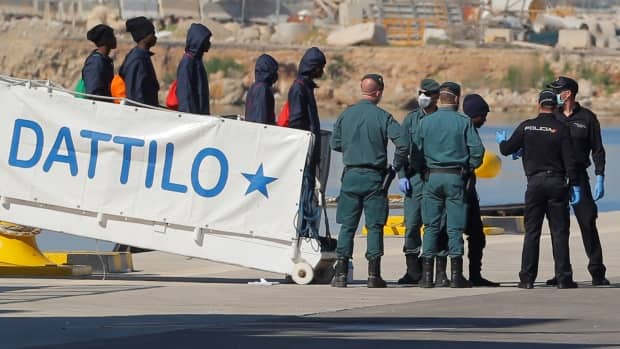 The first ship in the Aquarius aid convoy docked Sunday at the Spanish port of Valencia, ending a weeklong ordeal for hundreds of people who were rescued from the perilous Mediterranean only to become the latest pawn in Europe’s battle over immigration.

Medical staff boarded the Italian coast guard vessel Dattilo after it arrived just before 7 a.m. local time Sunday and the 270 migrants on board soon began to disembark. The rescue ship Aquarius and another Italian navy ship, the Orione, will arrive in the coming hours, discharging 630 migrants in all.

The Aquarius, operated by the aid groups SOS Mediterranee Sea and Doctors Without Borders, was stuck off the coast of Sicily last Saturday when Italy refused it permission to dock and demanded that Malta do so. Malta also refused.

After days of bickering and food and water running low on the rescue ship, Spain stepped in and offered to grant the rescue boat entry some 1,500 kilometres away. The journey across the Mediterranean to Valencia took nearly a week. 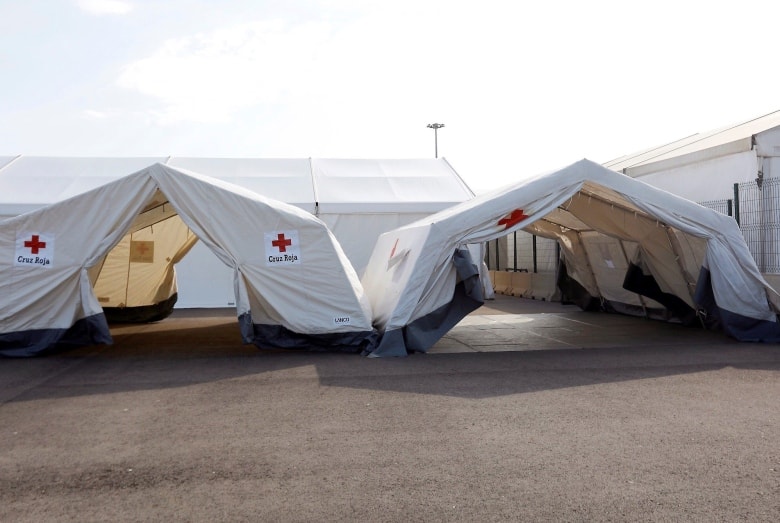 Red Cross tents are installed at Valencia’s harbour for the reception of migrants rescued by the Aquarius rescue ship. (Juan Carlos Cardenas/AFP/Getty Images)

David Noguera, the head of Doctors Without Borders in Spain, said he was glad that Spain allowed these migrants in but he’s worried that more European nations will close their ports to those rescued at sea in the future.

“I have mixed feelings,” he told The Associated Press on Sunday as the first boat arrived. “I am happy that the journey (for the Aquarius migrants) is over — a journey that was too long — and I am worried for the situation in the Mediterranean and the closing of European ports.”

The migrants were met by emergency workers, health officials, Red Cross volunteers and psychologists at the city’s marina. Each were assigned to a translator and authorities worked to determine their identities before they were sent to welcome centres. The first migrant was a 29-year-old man from South Sudan.

Some in a state of shock

Valencia emergency official Jorge Suarez said some of the migrants were in a state of shock.

“They are very shaken,” Suarez said. “Put yourself in their position, you get off a ship and the first people who greet you are wearing masks.”

Spanish authorities say they will examine the migrants case-by-case to see who may qualify for asylum.

Still, due to their ordeal, the migrants from the Aquarius will be granted a “special authorization” to remain in the country for one month before “they will be dealt with according to our laws, without exception,” said Spain’s minister of public works, Jose Luis Abalos.

“Spain will act with sensitivity and at the same time within the law, and with a message to Europe that it doesn’t have an immigration policy up to the challenge at hand,” he added.

Spain also accepted the French government’s offer to take in those migrants who want to go to France “once they have fulfilled the protocols.”

The boatload of migrants that was forced to spend days crossing the western Mediterranean includes 123 unaccompanied minors, 11 children and as many as seven pregnant women. After Spain invited the Aquarius to dock, Italy sent the Dattilo and Orione to help transport the migrants.

The refusal by Italy and Malta to allow the Aquarius to enter their ports has reignited a continentwide battle over how to handle immigration.

Under the EU’s asylum laws — currently the subject of a major political dispute and under revision — migrants must apply for asylum in the country where they first enter Europe. In practice, the policy has placed a heavy burden on Italy and Greece, where hundreds of thousands of asylum-seekers have arrived in recent years.

Spain’s new Socialist government has taken up the cause of the migrants’ plight to demonstrate its commitment to protecting human rights and respecting international law.

No agreement on influx

But overall, the European Union’s 28 members have not agreed in the least how to handle the influx of refugees and migrants to Europe. The issue has put strong domestic pressure on German Chancellor Angela Merkel, created a spat between France and Italy, and prompted eastern nations like Hungary and Poland to refuse to take in any migrants.

Immigration will be a top issue at the EU leaders’ June 28-29 summit — and a new populist government from Italy — one whose interior minister has vowed to deport tens of thousands of migrants as soon as he can — will make any compromise on migration policy even more difficult.

The arrival of the Aquarius convoy comes during a spike of desperate migrants heading to Europe from North African shores. Spain’s maritime rescue service pulled 986 people from 69 small boats near the Strait of Gibraltar between Friday and Saturday, and also recovered four bodies.

Fleeing violent conflicts or extreme poverty, thousands of migrants attempt the dangerous journey into Europe each year in smugglers’ dinghies.

At least 792 migrants have died crossing the Mediterranean so far this year, according to the United Nations. Through the first five months of 2018, some 35,455 migrants reached European shores, with 11,792 of them arriving in Spain.