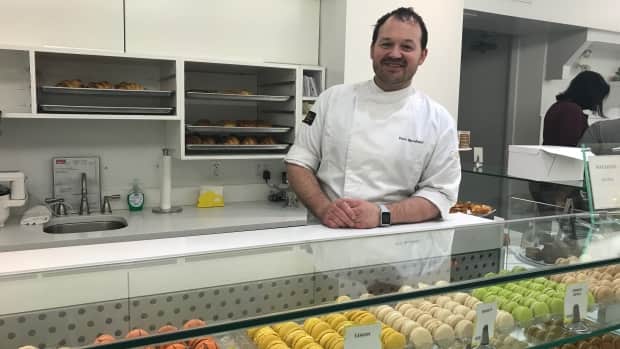 Four years ago, I had a butter epiphany.

My family was planning a trip to France and before we left, a foodie friend told me that I had to try French butter. Of all the possible foods to try in France, it seemed an odd recommendation. After all, butter is butter, right?

That turned out to be a very Canadian point of view.

When we arrived in Normandy and settled into our rented house, I headed to the store — not a charming French épicerie but a brightly lit supermarket with kids toys, two-euro wine and lots of fruit wrapped in plastic. As I turned the corner down the dairy aisle, it was as though a choir of angels began to sing. There was so much butter, of all permutations — cultured, uncultured, salted, unsalted, grass-fed and more.

The butter in France was amazing, life-changing. Enough so that I tried to track it down in Canada when I got home — with no luck. Foreign butter is all but impossible to find here. Very little is allowed over the border, which brings us to the current international debate over dairy in Canada.

Remember those 270 per cent dairy tariffs Donald Trump was complaining about? That’s actually a bit low — foreign butter earns a whopping 298 per cent tariff when it enters this country.

As international trade politics take aim at our protection of dairy — the quotas that require farmers to only produce as much as Canadians will consume and the tariffs that keep foreign dairy, chicken and eggs out of the country — it’s worth examining the impact of supply management through one product: the functional, yet underachieving pound of Canadian butter.

Yann Blanchard runs a bakery in Calgary, the only one in Canada to hold the Relais Desserts designation, the pastry equivalent of a Michelin star. When Blanchard started his bakery, he tried to use Canadian butter for his pastries but found that it didn’t work.

Blanchard makes sheets of butter for his croissants, and the sheets need to be perfectly square. He found Canadian butter to be too brittle but also too wet.

“When you bang it with the rolling pin, you can feel the moisture come in your face,” he said. “So, we have to put a sheet of paper or plastic over it, so that the moisture doesn’t fly everywhere. So, it’s not that difficult to find that it’s not the same quality.” 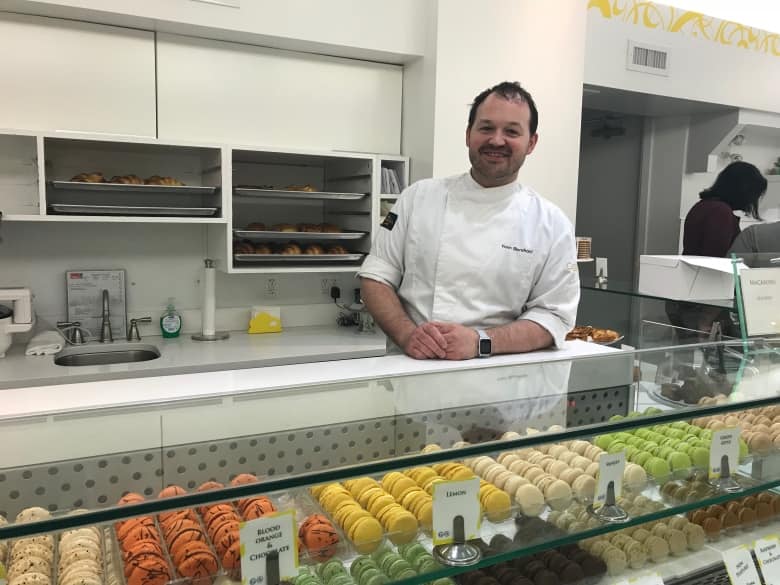 Yann’s issue was with the fat content of Canadian butter. It is mandated to be at least 80 per cent fat, which seems plenty high, but is still two per cent lower than standard European butter. European butter also tends to be cultured, meaning active bacteria is added to it before churning, giving it a tangy taste.

Blanchard decided to source higher-fat butter in Canada, no matter the cost, but then had a visit from a foreign butter middleman, a local creamery in Calgary that said it could find him some foreign butter at a very good price.

This is not back-alley foreign butter but a program from the Canadian Dairy Commission that imports nearly 3,300 tonnes of foreign butter into the country each year — and much of that goes to bakeries.

“They allow us to import butter. It’s weird,” said Blanchard. “So, if you go to the supermarket, you as the general public are going to pay more for lesser quality than I am going to get.”

While Blanchard is happy with the program, he doesn’t pretend to understand it.

“If you’re trying to promote the use of butter, why are you allowing us to import, why are you not pushing the industry to make better butter for us, promote your own farmers? I am French, but I am also Canadian, and I want to support what’s local. But I want quality.”

A short drive from Blanchard’s shop is a local butter factory called Foothills Creamery. Foothills is a relatively small operation that produces about five million pounds of butter a year, as well as ice cream that’s sold around Western Canada.

Cathy Sanders, who manages the plant, is passionate about butter and said Foothills has small enough churns that they can and have tried out different varieties of butter, such as maple, but they haven’t quite pinned down the market for non-standard butter varieties.

She recently visited a farmer, with grass-fed cows, which tend to produce the rich, yellow butter that is so popular in Ireland. Sanders is hopeful that he can take a piece of the artisanal butter market in Canada, given that Irish butter is hard to find and expensive. 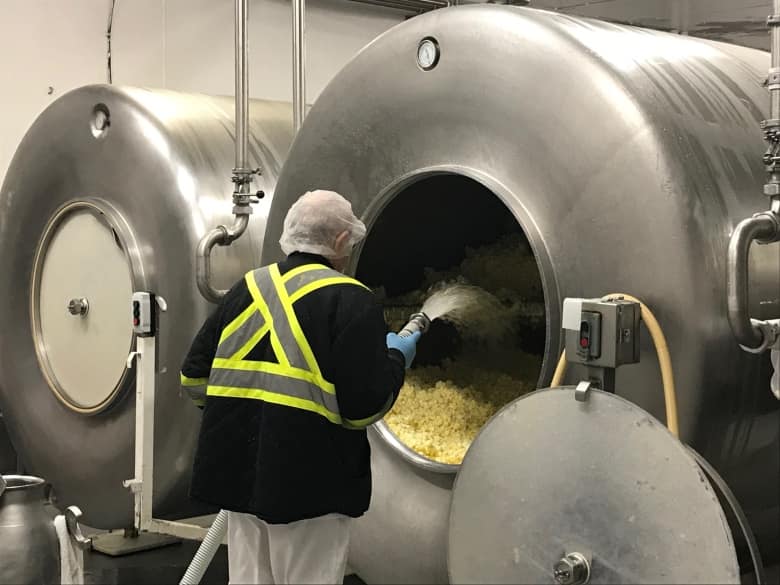 A worker washes curds at the Foothills Creamery in Calgary. (Tracy Johnson/CBC)

As a processor, Foothills is part of the supply management system, with production quotas and limited control over the source of cream that is supplied to churn butter.

But supply management offers Foothills stability. Sanders may not have control over her supply of cream, but knows Foothills will sell its production each year.

Like everyone in the dairy industry, Sanders is cautious when talking about supply management. She said that Canadian farmers supply good quality milk, but as a processor, she admitted there would be some upside if dairy was a free market.

“On the manufacturing side, [a free market] makes sense,” said Sanders. “To get my ingredients from wherever I can, for the best price I can. But for the farmer making a living in the industry and making a good quality product, which they do, [supply management] is probably what they need.”

Sanders pointed out that if the Canadian industry was opened up, it would cause a massive, fundamental change to how farmers operate — in part because of transportation costs.

Due to the cost of trucking, in the U.S., new dairy farms tend to be built around processing plants.

“Trucking is expensive,” said Sanders. “And it’s a whole cost in our system that we help pay for. If we lost supply management, they’d have to look at how they farm. They couldn’t have a farm here of 40 cows and another one here of 100 cows. They’d have to get them all together, and [put] big farm operations close to plants.”

That is exactly what dairy farmers dread.

Why politicians buy into supply management

Every 48 hours, a milk tanker pulls up to the Kootstra family farm in central Alberta. It drains the tanks that are filled by the approximately 160 cows that Tom Kootstra or his sons milk twice a day. Then the truck carries on down the road to the next farm. 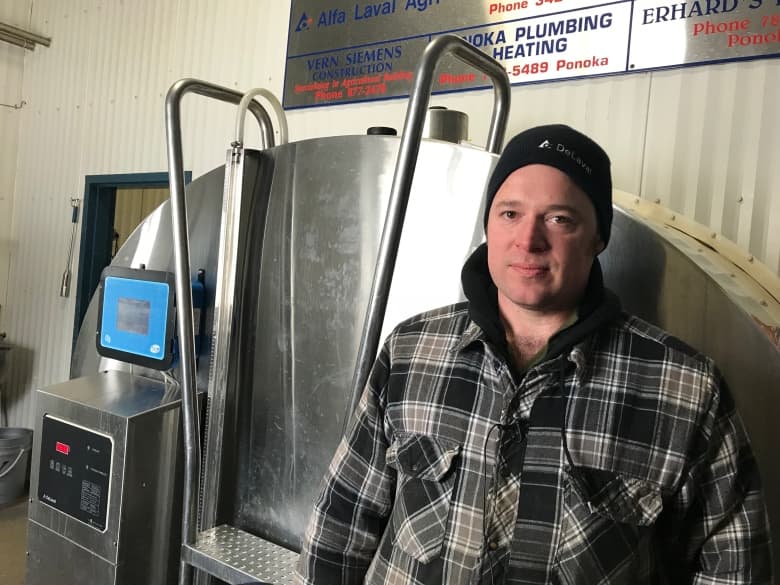 Craig Koostra returned home to join his family dairy farm after a decade in the military. (Tracy Johnson)

As Cathy Sanders pointed out, every day across Canada, these trucks lumber their way up and down rural roads, picking up milk from farmers.

The system is predictable. Kootstra, who is also the chair of Alberta Milk, knows exactly how much milk he’s going to sell each month, and the price he will get for it.

That’s a luxury rare to agriculture. Canada’s dairy, poultry and egg markets are unique in the world, which is why the supply management system has been a thorn in the side of Canada’s trading partners for years.

The conundrum of supply management is that outside the system, it makes no sense. Why should dairy, eggs and poultry enjoy the protection of quotas and tariffs when beef, grain and apples, for example, must survive in the thrust and parry of an open market? Especially when research shows that supply management forces consumers to pay higherprices.

Inside the system, though, all this makes perfect sense. It ensures stable, consistent dairy supply that takes the whiplash out of being a primary producer of food, encourages family farming, avoids direct government subsidies and keeps food local. Kootstra thinks that it should be a model for all agriculture.

The Australian example looms large over Canada’s dairy industry, In 2000, Australia abolished its supply management system. Dairy farmers were paid for the quotas and the country saw a substantial contraction in the industry.

Australia now produces less milk than it did in 2000, the year supply management was axed, even as its population has grown. Meanwhile, its neighbour, New Zealand, has become a dairy powerhouse, particularly when it comes to butter.

The very mention of Australia makes Tom Kootstra emotional. He pointed out a disturbing partnership at a dairy event he attended Down Under.

“I was at the National Holstein show in Australia last January, and they partner with a charity of choice, called Lifeline,” said Kootstra. “A suicide prevention charity.”

Passionate farmers like Kootstra bring politicians over to the side of the dairy industry, especially since Canadian consumers have yet to rally around the idea of lower prices for dairy (and economists don’t hold a big enough voting bloc).

To bring this back to that pound of butter, it means that unless there is an enormous upheaval as a result of this latest dairy spat with the U.S., foreign butter will continue to be a tough find in this country.