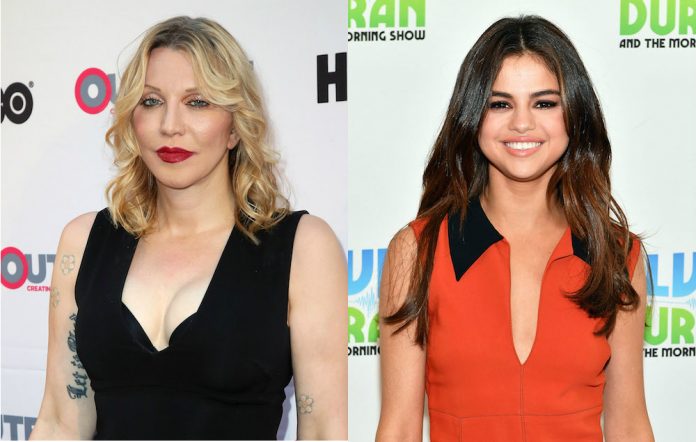 Thursday marked Spirit Day, a national day in the US dedicated to supporting LGBTQ youth. That evening, The Sayers Club in Los Angeles played host to a fundraising concert for GLAAD, hosted by songwriter Justin Tranter.

The Hole frontwoman performed at the event, duetting with Tranter on Gomez’s ‘Hands To Myself’. You can watch fan-shot footage of the performance below, via Consequence Of Sound.

Earlier this month, footage of Love warning women about working with Harvey Weinstein came to light.

The Hollywood producer has been at the centre of a storm of sexual harassment allegations recently, with stars such as Gwyneth Paltrow, Angelina Jolie and Lupita Nyong’o speaking out against him.

In a clip filmed at Comedy Central’s roast of Pamela Anderson in 2005, comedian Natasha Leggero asks Love what advice she would give a “young girl moving to Hollywood”. Love responds: “Um… I’ll get libelled if I say it. If Harvey Weinstein invites you to a private party at the Four Seasons, don’t go.”

After the video recently re-emerged on the internet, Courtney took to Twitter to confirm that she wasn’t one of his victims.

She also revealed that she was “eternally banned” by the CAA (Creative Arts Agency), an entertainment and sports agency for her comments.