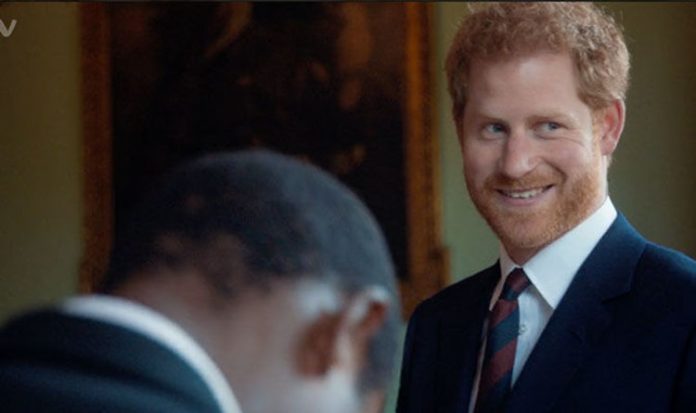 The Duke of Sussex made the shock admission as he met a group of budding hospitality workers from the Caribbean who are training and staying at the Queen’s residence as part of a scholarship gramme.

He cheekily asked them: “Have you bumped into the Queen yet? Not yet?,” before joking: “If you suddenly bump in to her, don’t panic.

Prince Harry, 34, also made a surprising revelation about how much time he has spent at Buckingham Palace.

Shaking hands with Claudine, an apprentice from the Caribbean, he asked her how long they have been staying at the palace to which she replies: “Two weeks.”

The duke then asked how comfortable the rooms are, and joked: “You’re not all bunked in one room together?”

But Claudine left the Duke of Sussex in fits of laughter when she replied: “No, but we have parties every night.”

And it wasn’t long before Prince Harry joined in by making the admission: “You guys have spent way more time in Buckingham Palace than I ever have and you’ve only been here for two weeks, I can assure you.”

The hilarious exchange was filmed as part of a two-part ITV documentary Queen of the World, which explores the longest-reigning monarch’s role as head of the Commonwealth.

Students from the Caribbean spent time at the royal household as part of a scholarship programme launched by Prince Harry in Grenada.

This year, the Duke took on the very special role of the Commonwealth Youth Ambassador as granted to him by his beloved grandmother, the Queen.

The documentary, aired on ITV on Tuesday night, showed the lives of her descendants, staff members and all those who make up the Royal Household.

It also featured the Queen’s granddaughter-in-law, Meghan Markle, who revealed a secret about her stunning wedding dress.

One of the most iconic wedding ensembles of all time, the Duchess of Sussex wore a custom-made Claire Waight Keller for Givenchy gown.