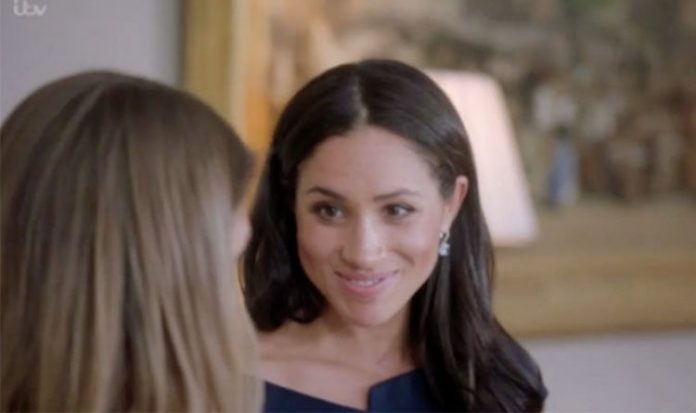 Viewers claim the Duchess of Sussex could have undergone vocal coaching to eradicate her US twang as she transitions into royal life.

The 37-year-old joined the firm just over four months ago and has taken to royal life effortlessly.

But when the ITV documentary, which aired last night, showed the duchess reunited with her stunning Royal Wedding dress viewers were quick to notice Meghan’s apparent change in tone.

Another said: “#QueenOfTheWorld Meghan is losing her American accent.”

A Twitter user noted: “#QueenOfTheWorld Meghan has had voice coaching, she seems much softer, bit like how Kate’s changed too.”

Meghan was reunited with her Givenchy wedding dress for the documentary about the Queen’s Commonwealth connections.

Queen of the World showed the newlywed Duchess admiring the delicate fabric of her dress after her wedding day.

She spent time inspecting the intricate detail of her veil, which included wild flowers from all 53 of the Commonwealth countries.

It was the first time she had chance to inspect the craftsmanship of the veil, having only seen it moments before she wore it on her wedding day.

The 37-year-old also proudly told of the moment she asked designers to incorporate the California poppy into her gown in a touching tribute to her home.

She said: “We wanted to have the spirit of inclusivity in our wedding.

“I stuck in a couple of flowers that were important to me personally, there is a California poppy in there which has nothing to do with the Commonwealth but is where I’m from.”

Meghan revealed how no flower repeated itself on her train famously carried by her two pageboys at her May 19 Royal Wedding.