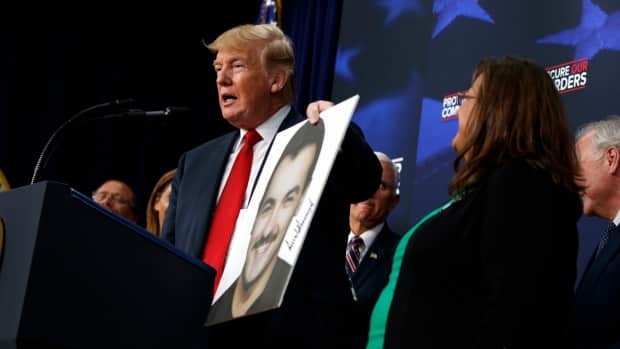 U.S. President Donald Trump cast doubt Friday on wrenching tales of migrant children separated from their families, dismissing “phoney stories of sadness and grief” while asserting the real victims of the nation’s immigration crisis are Americans killed by people who unlawfully cross the border.

Bombarded with criticism condemning the family-separation situation as a national moment of shame, Trump fired back, sometimes twisting facts and changing his story but nonetheless highlighting the genuine grief of families on the other side of the equation.

“You hear the other side, you never hear this side,” said Trump, standing with a dozen of what he calls the “angel families” who lost loved ones at the hands of people in the country illegally. He focused on the fact that young migrants separated from parents are likely to be reunited, unlike the victims of murders.

Guatemalan mom and son were apart for nearly a month after crossing at Arizona 1:24

But that rare moment of public capitulation was brief. That night, Trump attended a rally in Minnesota and laced his remarks with hardline immigration rhetoric that continued Friday. In a tweet, the president raised questions about whether the migrants’ hardships really existed.

We must maintain a Strong Southern Border. We cannot allow our Country to be overrun by illegal immigrants as the Democrats tell their phony stories of sadness and grief, hoping it will help them in the elections. Obama and others had the same pictures, and did nothing about it!

Trump’s suggestion that the stories were erroneous was likely fuelled by revelations Friday about one of the defining images to this point in the crisis — a two-year-old Honduran girl crying as her mother was stopped by a Border Patrol agent. But the girl in the photograph, who ended up on the cover of Time Magazine this week, was not separated from her mother but detained with her, the child’s father told the Daily Mail. Time Magazine said it stood by the image because it captures “the stakes of this moment.”

Trump has long chafed at the media’s treatment of his presidency. His fury grew in the past week when he felt that he did not receive proper credit for his summit in Singapore with North Korean leader Kim Jong-un. Some conservatives seized hold of the photo faux pas to attack the media.

“It’s shameful that dems and the media exploited this photo of a little girl to push their agenda,” White House press secretary Sarah Huckabee Sanders tweeted.

Other Trump allies have gone even further. Ann Coulter, a conservative pundit, said Sunday in an interview on Fox News that kids at the border were “actor children” who were “given scripts to read by liberals.”

Coulter then turned to the camera and said to Trump, “Don’t fall for it.”

As part of his defence for his zero tolerance border crossing policy, Trump has frequently pointed to — and exaggerated — the threat posed by members of the violent gang MS-13 who have entered the United States.

The Justice Department on Friday unsealed an indictment charging 11 suspected MS-13 gang members in connection with the killings of two teens in Virginia. All the suspects were from El Salvador.

But the central piece of Trump’s attempts to counter-program against the despairing images at the border was to stand with the “angel families,” as he did repeatedly during his presidential campaign. At the sombre event at the White House complex on Friday, Trump introduced the families, who delivered heartbreaking tales of their loved ones’ lives and, at times, gruesome descriptions of their deaths. 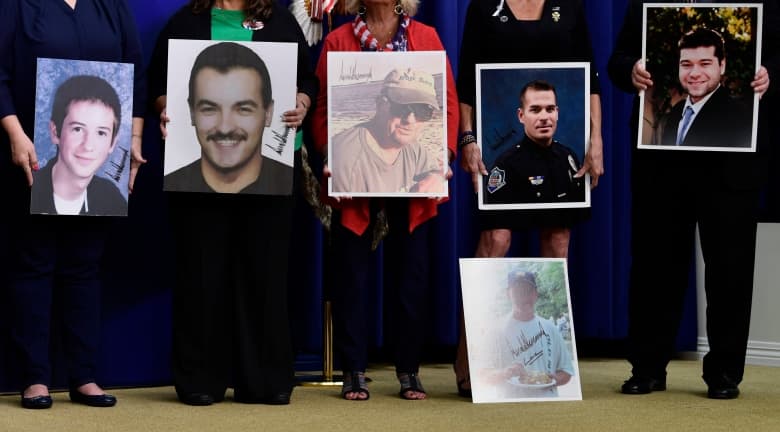 People who have lost family members from crime committed by undocumented immigrants hold photos of loved ones autographed by Trump. (Susan Walsh/Associated Press)

Many of them held large photos of their loved ones, some of which the president autographed. Trump said that one of the victims looked like the actor Tom Selleck.

“Your loss will not have been in vain,” Trump said. “We will secure our borders, and we will make sure that they’re properly taken care of.”

The president also rattled off a litany of statistics that indicated that illegal immigrants commit violent crimes at a far higher rate than U.S. citizens, saying “you hear it’s like they’re better people than what we have, than our citizens. It’s not true.”

But his assertion has been contradicted by a number of studies, including one by the Cato Institute and another in the journal Criminology that found that places with higher percentages of undocumented immigrants do not have higher rates of crime. 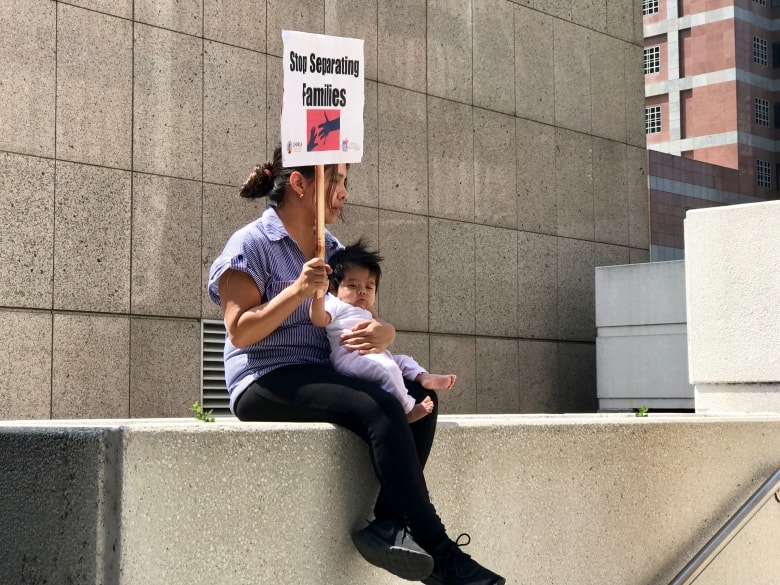 Demonstrators in Los Angeles on Friday protest against migrant children being separated from their parents at the U.S. border. (Kim Brunhuber/CBC)

A Homeland Security report said there were 972 calls reporting crimes to its Victims of Immigration Crime Engagement hotline from April 26 through Sept. 30 last year. The hotline handled a total of 4,602 calls, including general comments. The report said some of the calls were made for victim impact statements that lead to the deportation of someone who commits a crime. Victims also testified in immigration court proceedings, and their calls led to the arrest and detention of others.