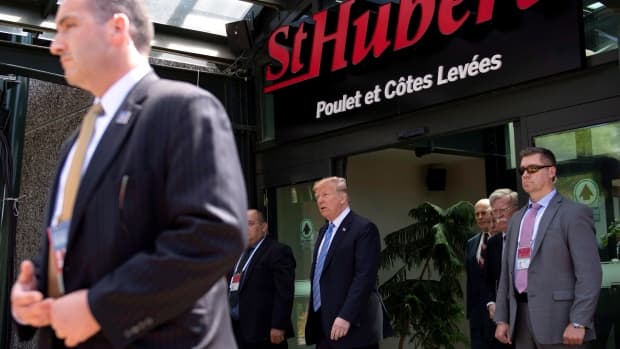 Local and international politics will intersect when voters in Chicoutimi–Le Fjord go to the polls in a federal byelection on Monday.

The big question going in is: who will turn out to have the most clout in the Quebec riding — the former hockey coach, or the current president of the United States?

There have been a dozen federal byelections since 2015. The Liberals have the better record so far, having wrestled two seats away from the Conservatives in those 12 contests. On Monday, the Conservatives are hoping to pull one back.

The Liberals won Chicoutimi–Le Fjord by a narrow margin in 2015 and the seat is up for grabs again, following the resignation of Denis Lemieux as the Liberal MP last November. Three years ago, the party just managed to inch ahead of the New Democrats in the riding.

Lemieux won with just 31.1 per cent of the vote in 2015, in what was a four-way race. Incumbent NDP MP Dany Morin fell short with 29.7 per cent — only 600 votes behind Lemieux. The Bloc Québécois and Conservatives followed with 20.5 and 16.6 per cent of the vote, respectively.

It was an unexpected breakthrough for a party that had won the seat only once before since 1980 — and even then it was thanks to the floor-crossing of PC MP André Harvey before the 2000 election. Otherwise, the Bloc had a stranglehold on the riding (as the party once had throughout the Saguenay–Lac-St-Jean region), winning it in 1993, 2004, 2006 and 2008. The seat fell to the NDP as part of Jack Layton’s orange wave in 2011.

Considering that the Liberals are ahead in the polls in Quebec, the party really shouldn’t be in a position to lose a seat it holds there now.

But the Conservatives have put forward a high-profile candidate. Richard Martel coached the Chicoutimi Saguenéens of the Quebec Major Junior Hockey League over eight seasons, winning coach of the year honours in 2005.

The Liberals are running local businesswoman Lina Boivin, who simply cannot compete with Martel for name recognition. Nor can the NDP’s Éric Dubois, the Bloc’s Catherine Bouchard-Tremblay or the Greens’ Lynda Youde.

(John Turmel, however, is a name familiar to election watchers. The independent candidate is running in Chicoutimi–Le Fjord; it’s his 95th campaign for public office — a world record he adds to each year without ever having won. He took just 59 votes in the riding of Brantford–Brant in the Ontario provincial election earlier this month.)

If the provincewide polling is anything to go by, the Liberal party should be the favourite in this riding. The party is ahead in the polls in Quebec with 39 per cent, according to the CBC Poll Tracker. That’s up three points from the 2015 federal election.

The Conservatives have also gained, increasing their support in the province by five points to reach 22 per cent. The NDP has fallen seven points to 18 per cent, while the Bloc is down four points to 15 per cent.

Apply that swing to Chicoutimi–Le Fjord’s 2015 results and you’ve got the Liberals winning by about 11 points over the NDP, with the Conservatives and New Democrats vying for second spot. The Conservatives need a 14.5-point swing in their favour in order to take the seat. At the moment, their position in Quebec relative to the Liberals has improved by just two points.

But byelections can often buck wider trends — particularly when a candidate with high name recognition is on the ballot.

This time, the Conservative candidate could pull off the upset. A recent Segma Recherche/Le Quotidien-Radio-Canada poll suggests Martel is the favourite, with 48.5 per cent support compared to 26.7 per cent for Boivin.

(The survey was conducted by telephone interviews, using randomly selected landlines and cellphones, of 402 people from June 7 to 12. That sample size suggests a margin of error of plus or minus 4.9 per cent, 19 times out of 20.)

The sample size in the poll was relatively small and riding-level surveys have been hit-or-miss in the past. But high-profile candidates can make waves in local contests.

The value of such a candidate can be limited in a general election, when the national campaign and the performance of the leaders are paramount. In byelections, which tend to see lower turnouts, the impact of good candidates can be dramatic.

In the Lac-Saint-Jean byelection held in October, the Liberals were able to gain 20 points over their 2015 performance thanks in part to the candidacy of Richard Hébert, a well-known local mayor. That 20-point increase came at a time when the Liberals’ support in Quebec was only about five points better than it had been in 2015.

The turmoil within the Bloc Québécois might also play in the Conservatives’ favour. Though Martine Ouellet was rejected by members earlier this month and is out as Bloc leader, the local riding association still will not support Bouchard-Tremblay, the candidate appointed by Ouellet.

Conservative Leader Andrew Scheer has made a direct play for nationalist voters in the province and his party’s support is up significantly in Quebec over the last few months. Michel Gauthier, a former leader of the Bloc who was MP for the nearby Roberval–Lac-St-Jean riding from 1993 to 2007, campaigned alongside Scheer in the riding on Thursday and could help his cause.

But another factor that could prove influential in this byelection comes from an unexpected quarter — the White House.

The trade dispute between Canada and the United States — which became personal when U.S. President Donald Trump recently called Prime Minister Justin Trudeau “dishonest and weak” — has a direct impact on voters in Saguenay, which forms part of the Chicoutimi–Le Fjord riding. The U.S. has imposed a 10 per cent tariff on Canadian aluminum, a third of which is manufactured in Saguenay.

It isn’t clear how that will play out. Voters could punish Trudeau for the breakdown in U.S.-Canada relations or reward him for standing up to the U.S. president and pledging to defend the Canadian aluminum industry.

Whatever happens, the trade dispute adds an unexpected and unpredictable twist to this byelection. From the parties’ perspective, of course, a win is a win — no matter who or what caused it.