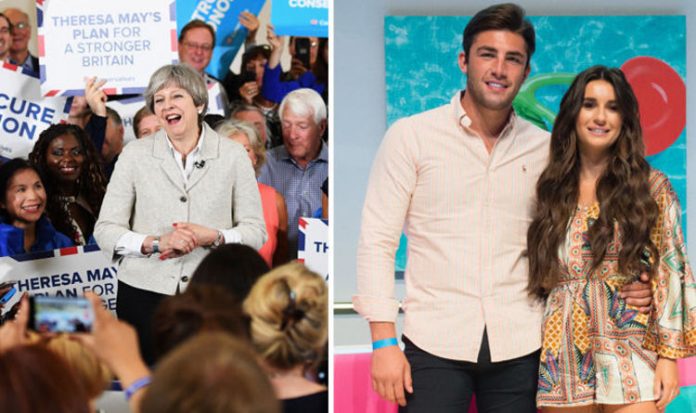 According to reports the wannabe MPs are being asked to talk about Love Island “convincingly, off the top of their heads” for three minutes.

This is being done by a selection panel in Cambridgeshire.

Local Tory activists and potential candidates have responded with fury.

One local member told The Sun: “Why are we always limping behind the latest fad or fashion but never catching up, and succeeding only in making a fool of yourself?

“We should be asking how to negotiate the difficult path to Brexit, fight terrorism and many other serious issues.

“We desperately need men and women who are articulate, well read, and have experience of the real world.

“Whoever chooses these questions should be sacked and replaced with someone in touch with the real needs of the Great British public.”

The Sun is reporting that “dozens” of potential Tory candidates are furious about the question.

They are demanding the central Conservative Party step-in to ban the question.

It seems the Love Island questions are being asked in a bid to make sure potential Tory MPs can connect with younger voters.

It’s just the latest in a long line of controversies which have resulted from MPs trying to attract the youth vote.

In the run-up to the 2015 General Election then Prime Minister David Cameron accidentally claimed to be a West Ham United fan when he actually supports Aston Villa.

Back in 2006 Gordon Brown, then Chancellor of the Exchequer, surprised observers by claiming to be a big fan of rock band Artic Monkeys.

A Tory Party source defended the Love Island question to The Sun saying they ask questions on popular culture to take candidates out of their comfort zone.