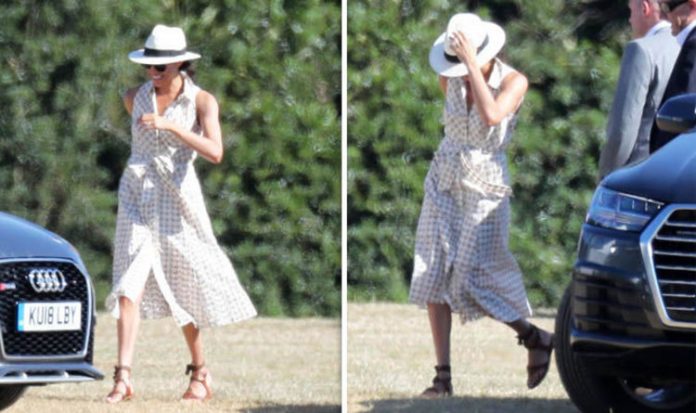 Prince Harry and big brother William were playing at the Audi Polo Cup on Saturday, the day before their late mother Princess Diana’s birthday.

The Duchess was flanked by security and seems eager to avoid the cameras, but was full of smiles in the summer sun.

The dress was designed by Shoshanna Gruss and cost £299 – and is already sold out.

Finishing the look off, the stylish Duchess wore a pair of sunglasses and a white-and-black Madewell x Biltmore Panama hat, which is also sold out.

Prince Harry was competing in the match for the second day after making a surprise appearance on Friday.

The Duke took on the UAE alongside the US team Valiante on Friday, and raised £200,000 for two of his charities, the Royal Foundation and Sentebale.

Prince William’s wife Kate, Duchess of Cambridge, and their children were not spotted at the event.

Serena Williams, taking a break from her busy training schedule ahead of Wimbledon, described the day as “super fun.”

Serena and Meghan have a long friendship, and both Serena and her husband were at Meghan and Harry’s wedding in May.

Speaking with InStyle, she commented on Meghan’s big day, saying: “You know, I’ve known Meghan for years, so it was good to see my friend happy.”

Last week, Serena made headlines when she called the Kate, Duchess of Cambridge a “badass woman” for her incredibly speedy recovery after giving birth to Prince Louis in April.

Serena is returning to Wimbledon this year after being on maternity leave.

She is scheduled to compete in the first round of Wimbledon on Monday, where she will be vying for her 24th Grand Slam singles title.