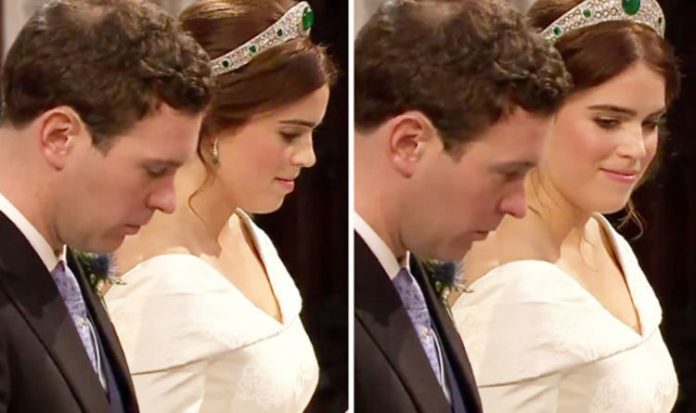 Princess Eugenie, 28, the Queen’s sixth grandchild, grinned as she married her wine merchant fiancé Jack Brooksbank for the second royal wedding of the year.

In response to the grin, husband Jack looked at Eugenie and lovingly smiled.

Groom Jack burst into tears when he first spotted Princess Eugenie entering St. George’s Chapel ahead of their wedding ceremony.

Jack was forced to momentarily remove his glasses to dry his tears before the ceremony started and was forced to take them off completely as Princess Eugenie joined hit at the altar.

Guests at the wedding include Kate Moss, Demi Moore and Naomi Campbell among other A-List arrivals.

Windsor was expected to escape the worst of Storm Callum, but conditions were very blustery as the guests arrived, with many holding on to their hats.

One man was even spotted chasing after a fellow guest’s hat as it blew off and rolled along the ground.

The gothic chapel was filled with autumnal flowers, chosen by Eugenie to evoke the rich and vibrant tones of the season.

The Queen and Prince Philip and Prince Charles – without his wife Camilla – also arrived in Windsor.

The monarch, who arrived with the Duke of Edinburgh, was wearing an ice blue Angela Kelly coat, dress and hat – with large gold and diamond buttons and an ice blue and peach scalloped lame dress.

Other royals in attendance include Princess Anne, Sophie, Countess of Wessex and Prince Edward, Zara Tindall and her husband Mike Tindall.

Meanwhile, Kate’s pregnant sister Pippa Middleton had been spotted in Windsor showing off her growing baby bump alongside her husband, James Matthews.

In Windsor town, royals fan keen to catch a glimpse of the bride and groom noted it was quieter than for Harry and Meghan’s high-profile nuptials at the same venue in May.

Kerry Evans, 54, from Lincolnshire, has been in the crowds of both royal weddings this year.

She said: “I wanted to be part of the wedding and the traditions because it’s all part of being British.

“I thought there would be lots of people arriving but there aren’t, I’ve been waiting and waiting.”