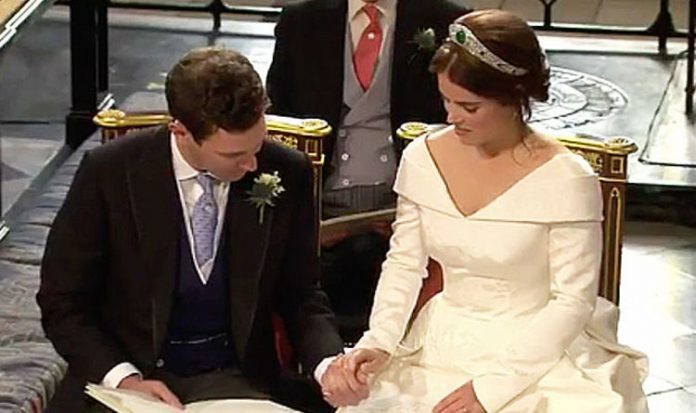 Jack could be seen reaching for Eugenie’s right hand as his cousin Charles Brooksbank delivered his speech in front of the congregation.

Princess Eugenie could also be seen lovingly holding her husband’s hand while adoringly smiling at him.

As Eugenie walked down the aisle Jack was forced to momentarily remove his glasses to dry his tears.

The couple, who started dating in 2010, will be wed at St George’s chapel – the same venue as Prince Harry and Meghan Markle.

She was said to have been a “bag of nerves” ahead of meeting her former father-in-law Prince Philip, who has never forgiven her for the scandal she caused when she was caught in the infamous “toe-sucking” incident with oil tycoon, John Bryan.

Princess Eugenie, who is ninth in line to the throne, stunned in an ivory dress, designed by British-based Peter Pilotto and Christopher De Vos.

The 28-year-old’s dress features a neckline that folds around the shoulders to a low back that drapes into a flowing full-length train.

The dress also includes a number of symbols that are meaningful to Princess Eugenie as motifs, including a thistle for Scotland acknowledging the couple’s fondness for Balmoral, a Shamrock for Ireland as a nod to the bride’s Ferguson family, and the York Rose and ivy representing the couple’s home.

Her husband-to-be Jack looked emotional and appeared to wipe away tears at the altar, alongside his best man and brother Tom Brooksbank.

Mother of the bride, Sarah Ferguson, arrived for her daughter’s wedding and was quick to greet royal fans before heading into the chapel.

The 58-year-old, looks radiant in a vibrant green dress and hat, was joined by her eldest daughter, Princess Beatrice, who is her sister Eugenie’s maid of honour.

Maid of Honour Princess Beatrice is wearing a royal blue outfit by Ralph and Russo and a headband style hat by Sarah Cant.