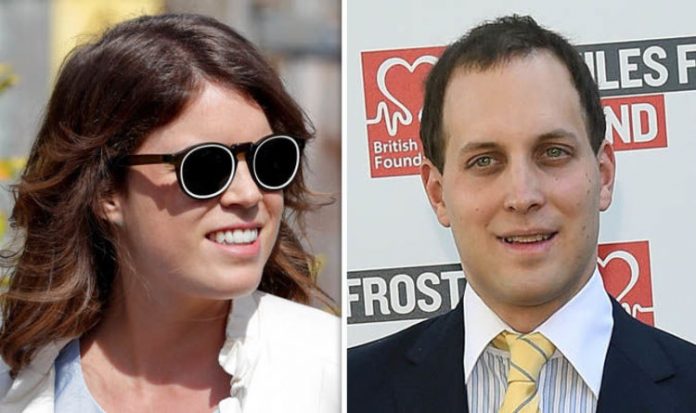 Certain members of the extended Royal Family surprisingly missed out on invitations to the nuptials of Prince Harry and Meghan Markle in Windsor in May.

While Prince and Princess Michael of Kent were present at the celebrations, their children Lord Frederick Windsor and Lady Gabriella Windsor were noticeably absent.

Royal expert Richard Fitzwilliams nevertheless noted the young Royals may be in luck for the upcoming nuptials.

Speaking exclusively to Express.co.uk, he said: “Some members of the extended Royal Family who were not at Harry and Meghan’s wedding may well be at Eugenie and Jack’s.

“There were some absentees such as Lord Frederick Windsor and Lady Gabriella Windsor, but there were very few who were not there and space was restricted.”

The Royal expert noted Princess Eugenie will have a large guest list of up to 850 friends and family, 50 above the supposed capacity of the chapel, and may therefore have sufficient space to invite all members of the Royal Family.

He also noted Eugenie and Jack will follow in the footsteps of Meghan and Harry with a star-studded list of celebrity guests.

Commenting on Meghan and Harry’s guest list, he said: “The number of famous figures at Harry and Meghan’s wedding was phenomenal.

“It was a truly amazing list, from the Beckhams and Oprah Winfrey to the Clooneys and Serena Williams.”

He noted similar famous faces will likely be present at the October nuptials.

He said: “Rumours abound that the Clooneys might attend Eugenie and Jack’s wedding as Jack Brooksbank is a Brand Ambassador for Casamigos Tequila, which was co-founded by George Clooney.

“The Beckhams are also thought likely to attend, as is Robbie Williams, and Tracey Emin, Naomi Campbell and Kate Moss have also been mentioned.”

Mr Fitzwilliams noted the wedding will be an “impressive and fashionable show” regardless of who attends, and stated a number of famous figures will “certainly add interest to the event”.

Ellie Goulding, Cara Delevingne, Jack Whitehall, Jimmy Carr, and James Blunt are also known to be friendly with the Princess.