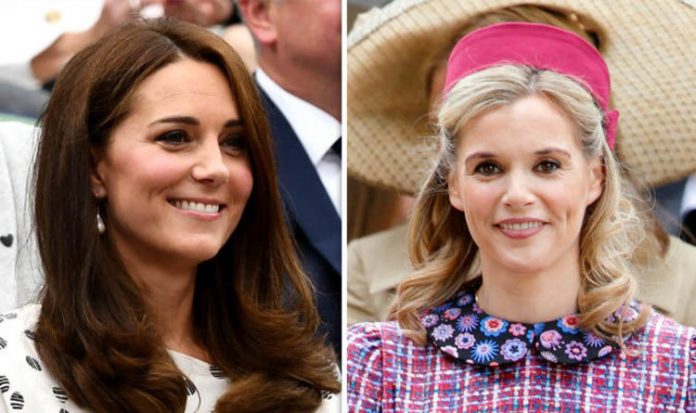 The in-demand Royals attended the wedding of Sophie Carter and Robert Snuggs, close friends of the Duchess, which took place at St Andrew’s Episcopal Church in Norfolk.

Prince George and Princess Charlotte were also in attendance at the society wedding, and were chosen to be one of three bridesmaids and one of four pageboys taking part in the ceremony.

A Royal insider commented on the young Prince to People, saying: “George is a real star, quite the little chap.

“Afterward, George was seen dashing around the churchyard while little Charlotte headed towards her mother, who picker her up and held her as they posed for pictures with Sophie’s family.

“He was having a great time, running around like the leader of the pack.”

The young Royals have taken on the roles of bridesmaid and pageboy twice before, during the wedding of Meghan Markle and Prince Harry in May, and at the nuptials of Pippa Middleton and James Matthews in 2017.

Prince George and Princess Charlotte wore traditional white and blue bridal outfits for the occasion, while Kate wore a striking blue dress, and William was seen wearing a traditional tailcoat.

Also in attendance were Kate’s parents, Carole and Michael Middleton, along with the Duchess’s brother, James Middleton.

However Pippa Middleton was notably absent, likely due to the fact she is expecting her first child next month.

Kate has been close friends with Ms Carter for numerous years, and the pair have been seen on various outings together.

The pair were first spotted together at Wimbledon in 2008 alongside a number of other female friends.

Ms Carter was also named one of Princess Charlotte’s godparents ahead of her christening in 2015.

The Royal insider commented on their friendship, saying: “Sophie has previously joined the Cambridges on ski vacations and has even accompanies Kate to church with the Queen at Sandringham.”

Ms Carter grew up in the village of Letheringsett, Norfolk, which is located close to the Duke and Duchess of Cambridge’s country retreat, Anmer House.

She is reported to have close Royal connections, and once dated Thomas van Straubenzee, a close friend of Prince William.