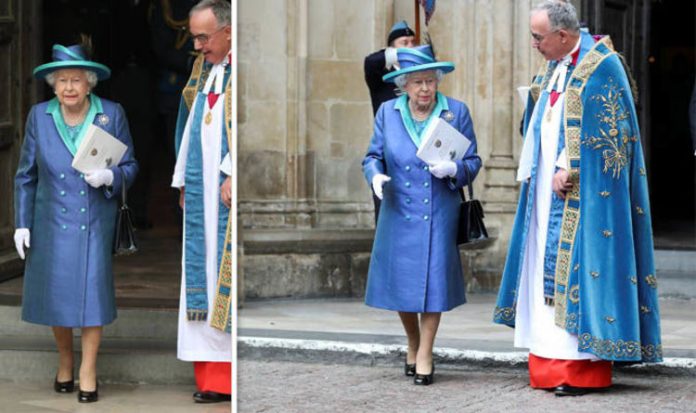 The Queen appeared to lose her footing as she approached the steps out of the abbey with the Dean of Westminster, the Very Reverend Dr John Hall.

The Dean looked concerned as he reached out his hand in case the 92-year-old tripped.

However, the Queen was able to keep her balance without his help and regained her posture as she left the abbey all smiles.

The service celebrated 100 years since the Royal Air Force was founded after the Royal Flying Corps and the Royal Naval Air Service merged to create the service.

The Queen looked radiant in blue after missing the christening of her great-grandson Prince Louis yesterday.

She wore a royal blue silk coat with a turquoise collar and dress in the same colour. The Queen also wore a stunning hat and silver-spiked broach to match.

All the pieces were designed by her dressmaker Angela Kelly.

The Queen’s near-brush on the steps outside the abbey comes after it was revealed the monarch is refusing to undergo knee surgery.

A Buckingham Palace source said her knees have been “playing up” but she doesn’t want to make a fuss.

The Queen still remarkably carries out more than 200 royal engagements and visits a year, but she reportedly doesn’t want to take any time off and miss any engagements.

A Palace source told The Sun: “She was talking to friends at the Chelsea Flower Show and said her knees were playing up.

“But she is reluctant to have an op due to the time it would take to recover. She is incredibly brave.

“People from her and Philip’s generation battle through problems and carry on. And Her Majesty doesn’t like to cause any fuss.”

In 2003, she had an operation on her right knee after damaging cartilage when she fell over at Newmarket racecourse.

And a few months later, she had keyhole surgery to remove torn cartilage from her left knee.