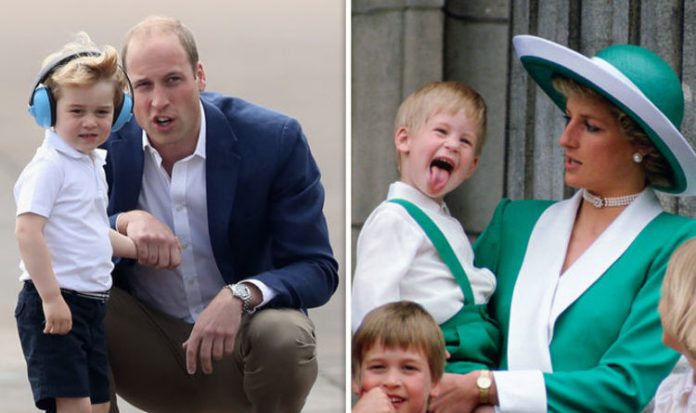 During Royal events, the Duke of Cambridge always holds Prince George and Princess Charlotte’s hands and gets down on their level to explain what is going on around them during high-profile ceremonies.

According to the source, this tactic was employed by his departed mother Princess Diana, in order to make her children, Prince William and Prince Harry, feel comfortable and involved in any situation.

The source told People Magazine: “William can do all the things that he thinks are important for family life and make sure that his children have that loving, caring, fun home that his mother was trying to create.”

When Diana spoke with children, she always crouched down to see them at eye-level.

Ingrid Seward, the editor of Majesty magazine, said: “She was the first member of the Royal Family to do this.

“The Royal Family used to say that everyone had to be deferential to them but Diana believed, ‘If you’re speaking to a very young child or a sick person, get yourself on their level’.”

Both Prince William and Harry previously said they wished to be like their mother as a parent.

“She was one of the naughtiest parents,” remembered Prince Harry during an interview for a documentary dedicated to his mother’s life aired on HBO.

Prince William added: “She was very informal and really enjoyed the laughter and fun.

“But she understood that there was a real life outside of Palace walls.”

The Duke of Cambridge also said he regularly speaks about his mother when he puts his children Princess Charlotte and Prince George to bed, and explained: “there are two grandmothers in their lives, so it’s important they know who she was and that she existed.”

He joked: “She’d love the children to bits, but she’d be a nightmare.

“She’d come, probably at bath time, cause an amazing scene, bubbles everywhere, bath water all over the place, and then leave.”

According to the Royal source, it is “sad” that Prince William’s mother is missing all these landmarks moments.

However, the source continued: “But they are creating their own legacy now.

“As his own father has been.

“Prince Charles has been a very good father to those boys and they’re very, very fond of him.”