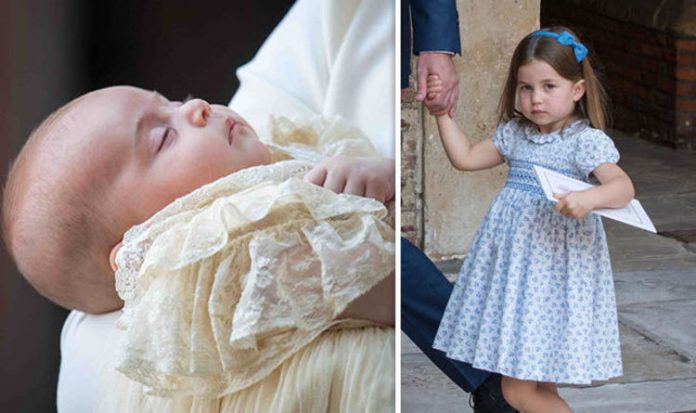 Prince Louis was baptised at the Chapel Royal on Monday, July 9 to the delight of his parents, the Duke and Duchess of Cambridge.

The private ceremony was overseen by his close family, including Prince Harry and Meghan, but not the Queen and Prince Philip.

The 92-year-old queen and her husband Prince Philip were not among the guests, but a royal source said it had been agreed some time ago that the queen would not attend and her absence was not due to any health issues.

The fifth-in-line to the throne was carried into the chapel by his beaming mother Kate, the Duchess of Cambridge.

Prince Louis’s siblings, Princess Charlotte and Prince George, appeared alongside their younger brother for his baptism.

It was the first time the Cambridges were seen together as a family of five.

Charlotte and George politely shook the archbishop’s hand as they arrived, with the Duke of Cambridge encouraging them with a “well done.”

But it was, Charlotte, who is known for her confident nature, who stole the show.

As she walked past photographers gathered outside St James’s Palace, she turned to them and appeared to say: “You’re not coming.”

She gave them a stern look as she clutched the Order of the Service and held on to her father’s hand.

One person wrote on social media: “Princess Charlotte walked past photographers on the way to the christening and told them ‘you’re not coming’ the sass is strong in this one.”

Prince Louis is 11 weeks old and was seen sleeping in his mother’s arms, having grown a touch of fine hair over his head since the public last saw him on the day of his birth.

The Duchess of Cambridge looked completely smitten with her youngest child, as she gazed lovingly down at the prince dressed in a replica of the gown commissioned by Queen Victoria for the christening of her daughter, Victoria, in 1841.

The new gown was designed by Queen Elizabeth’s assistant, Angela Kelly and Buckingham Palace’s team of dressmakers in 2008.

The gown was the same one wore by Prince George and Princess Charlotte at their own ceremonies in 2013 and 2015 respectively.

Guests were served slices of fruitcake taken from William and Kate’s wedding cake at the celebratory tea at Clarence House after the service.

Also in attendance at the ceremony were Kate’s parents, her brother and sister and Louis’s six godparents who are close friends or relatives of William and Kate.

They include Kate’s cousin Lucy Middleton, Nicholas van Cutsem, whose daughter was a bridesmaid at the wedding of Harry and Meghan in May, and Guy Pelly, a childhood friend of William’s.

The young prince was baptised using water from the River Jordan.