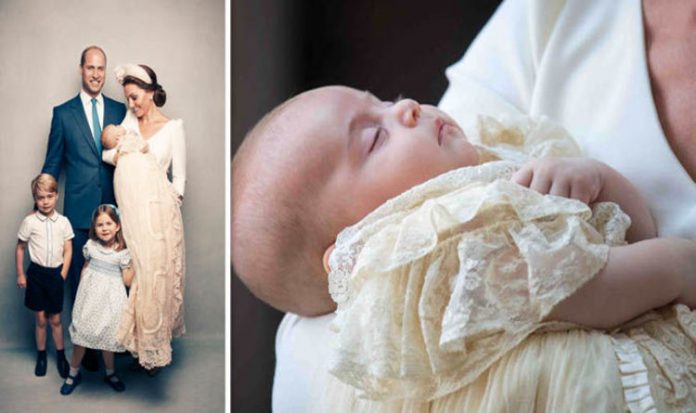 The prince, who is fifth in line to the throne, weighed 8lb 7oz.

Last Monday, he made his first royal appearance for his christening in The Chapel Royal at St James’s Palace on Monday, July 9.

What is the special meaning behind service’s songs?

During the christening’s processional, Prelude on Rhosymedre by Vaughan Willams played.

This song was also played at parents Prince Williams and Kate Middleton’s wedding in 2011, as well as the ceremony at Prince Charles and Diana Spencer in 1981.

Another hymn sung at Prince Louis’ service was This Is The Day Which The Lord Hath Made, which was composed by John Rutter for Kate and William’s wedding.

Guests of the christening also dined on fruit cake which was originally made for Kate and William’s wedding.

The cake has been preserved and was also served at the christenings of George and Charlotte.

The ceremony on Monday lasted 40 minutes and the royals were welcomed by the Archbishop of Canterbury.

He bent down to greet George and Charlotte at the entrance to the chapel.

Prince Louis was dressed a cream, frilly lace royal christening gown – a replica of the intricate robe made for Queen Victoria’s eldest daughter in 1841.

His six godparents were among the guests including the Prince William’s close friend Guy Pelly.

However, Buckingham Palace said the decision was made “some time ago” and not on health grounds.

In one of the photos, Kate and William are joined by their children Prince George and Princess Charlotte as the Duchess of Cambridge cradles her sleeping prince in her arms.

They were joined by Prince Harry and Meghan Markle, as well as Prince Charles, Camilla.

The Middleton family were also in attendance including Kate’s parents Carole and Michael, along will Kate’s sister Pippa Matthews, her husband James and brother James.