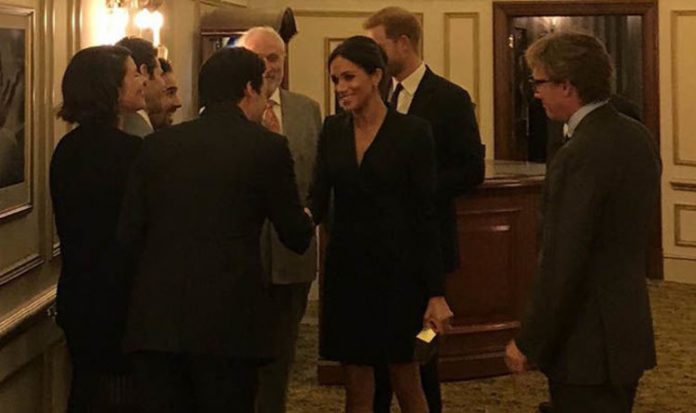 The Duchess of Sussex dazzled in a black Judith and Charles tuxedo dress and high heels as she arrived with her husband Harry in London’s West End.

The newlyweds looked cosied-up in the foyer of the theatre, with a snap picturing their hands touching – despite the royal protocol would prefer royal couples to refrain from displaying affection in public.

The pair are the guests of honour of the night, and are expected to go on stage with the the show creator, Lin-Manuel Miranda, to raise awareness and funds for the Duke’s much-loved charity, Sentebale.

They wrote on Twitter: “The Duke and Duchess of Sussex will attend a gala performance of @HamiltonWestEnd in support of @Sentebale at the Victoria Palace Theatre on Wednesday 29th August.

“The evening will raise awareness and funds for Sentebale’s work with children and young people affected by HIV.”

The organisation, set up with a close friend of Harry, Prince Seeiso of Lesotho, supports the mental health and wellbeing of children and young people affected by HIV in Lesotho and Botswana.

Sentebale is expected to receive thousands of pounds to help fund its work.

Tickets for the special performance ranged from £19.23 to £99.97, plus a charity donation.

Prince Harry is particularly fond of Lesotho, an African country he first visited in 2004.

There, he famously developed a close bond with Mutsu Potsane, a four-year-old boy the prince met again in 2016.

Mutsu was also invited to the Royal Wedding on May 19.

Following the footsteps of his mother, Princess Diana, Harry co-founded Sentebale with Prince Seeiso of Lesotho in 2006.

In June, the prince made an emotional return to Lesotho, in what Kensington Palace described as a “private visit”, to open a school and a house on behalf of the charity.

Meghan and Harry have already seen together Hamilton in February.

Turning up at the theatre, they left the cast thrilled with their appearance among the sellout crowd in what is believed to have been their first theatre date in the West End.

But Meghan has also seen the show in New York’s Broadway, where Hamilton was first launched, with her longtime friend Priyanka Chopra, as a snap posted on the Duchess’ now deleted Instagram account showed.