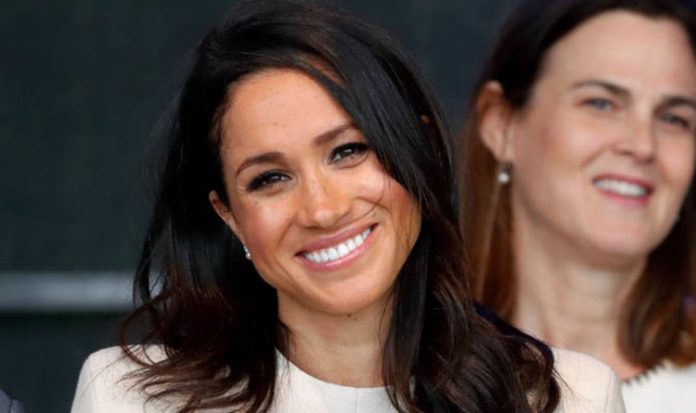 So remarkable that some claim the Duchess of Sussex has adopted a British accent after a tide was posted to Twitter of her greeting fans in Cheshire.

It was claimed the former Suits star had a change in her tune when she said phrases such as “Oh thank you” and “what’s your name?”

Meghan also said: “We all had a great day, I think.”

And in reference to her historic wedding day on May 19 she said: “The sun was shining for us.”

M’lye Miller chimed in: “I just watched a video that showed Meghan Markle’s starting to have a British accent and I’m so here for it you have no idea.”

However, one linguistic professor does not think the Duchess of Sussex has suddenly embraced a British accent.

Dennis Preston from Oklahoma State University is a leading linguistics expert and is able to detect the most minor of shifts in someone’s accent.

In Meghan’s case his verdict is there isn’t one.

He told Yahoo Lifestyle: “I did a very carefully listen, paying specific attention to her vowels, a big giveaway with British accents, as well as the intonation.

“I just didn’t find anything resembling a British accent. There’s nothing there.

“If Meghan had adopted the accent in the few months she’s been living in England, us linguists would be flocking there to study her as a strange phenomenon.

“These changes won’t happen overnight, and in the terms of language history, overnight is how long it’s been.”

Mr Preston does have an explanation behind why the internet still believes that Meghan does have a British accent.

He said: “She married an Englishman, she lives in England, she’s hanging with the Queen, and people think ‘gosh, she must be doing something with her language. It’s your brain playing a trick on you.”

“People speak quickly and we don’t have time to decode each sound, so the brain tells us what to hear. Essentially, our brain gets in the way of our ear. So we hear what we expect to hear, rather than what we actually do.”

Linguistics experts Bill Kretzschmar from the University of Georgia said people think she has a British accent because they want her to have one.

The professor said: “People may think Ms Markle sounds British because she has moved to England, not because she really does sound British.”

However, this does not rule out the possibility that Meghan will adopt a British accent over time.

Mr Kretzschmar said: “All of us human speakers ‘accommodate’ to each other — that is, we tend to talk more like the people we are talking to. Some people are better at accommodation that others, and Ms. Markle may be one of them.”

Mr Preston said: “The degree to which Meghan is going to accommodate her accent is absolutely unpredictable. We don’t know what value she’ll place on it, and that can affect the subconscious shift. She might feel like sounding British will make her seem like a phony, for example, so she may make an effort to stay away from it.”