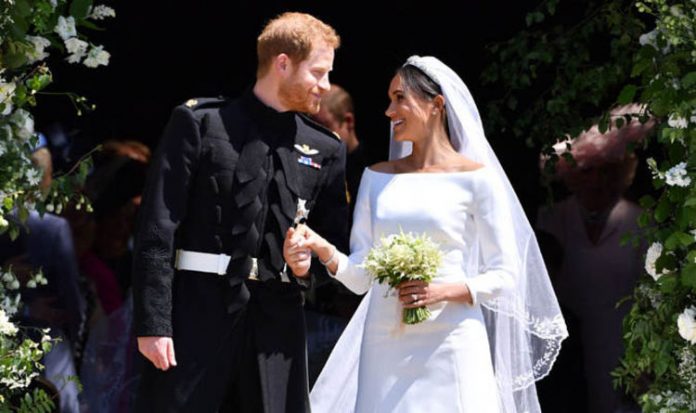 The Duchess of Sussex’s kept her bouquet sweet and simple, consisting of sweet peas, lily of the valley, jasmines, sprigs of myrtle and forget-me-nots – Princess Diana’s favourite flower.

Like the Queen, Princess Diana and Kate, the Duchess of Cambridge, Meghan decided not to throw her bouquet in the post-nuptials tradition.

Instead, the Duchess of Sussex’s flowers were sent to Westminster Abbey the following day, to be left at the Grave of the Unknown Warrior.

The gravestone commemorates an unidentified British soldier who died on the battlefield during the First World War, a symbol for all those who have died during the conflict.

The Queen’s mother began the tradition in 1923 after she married King George IV, when she laid her bouquet on the gravestone as she made her way into the wedding ceremony.

She did this to commemorate her brother, Fergus, who died in 1915 during the Battle of the Loos, as well as marking her respect for those who lost their lives during the war.

Royal fans are also curious about another aspect of Meghan’s bouquet.

Many have been questioning who handed the Duchess the bouquet as walked down the aisle, after footage showed a mystery woman pass her the bunch of flowers.

The woman was dressed in a light-coloured dress and hat, similar to Kate’s outfit, causing many to believe it was in fact the Duchess of Cambridge.

However, as Meghan reaches the end of the aisle, she passes Kate who is seen standing next to Camilla, the Duchess of Cornwall.

Many have jokingly claimed that Kate “teleported” across Abbey after handing Meghan her bouquet.

One wrote: “I think it was Kate as the person who handed her the flowers had long sleeves on.

Another said: “You can clearly see Kate.”

The mystery helper was in fact Samantha Cohen, the Queen’s former special advisor.

Ms Cohen, 49, has been helping Meghan adjust into royal life and agreed to stay on as an interim secretary to Meghan and her new husband, Prince Harry.

Royal fans expressed their disappointment to learn that the mystery woman was not Kate, who was mainly responsible for taking care of the pageboys and flowers girls – including children Prince George and Princess Charlotte.