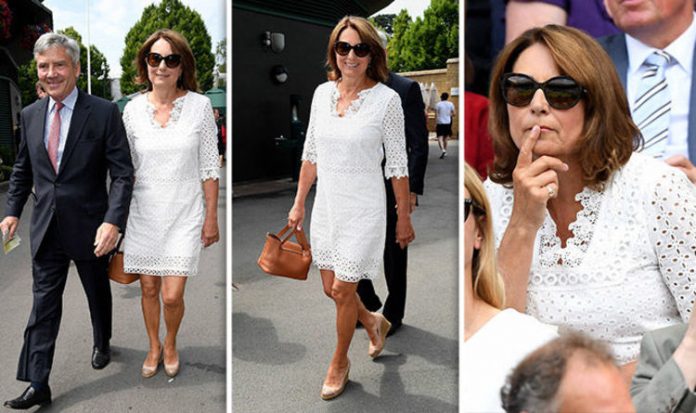 Mrs Middleton, 63, arrived in style alongside her husband Michael Middleton on day three of one of their favourite outings of the summer.

The couple, who are big fans of tennis, looked in good spirits as they made their way to the Centre Court where they took their seats in the Royal box.

Kate’s mum Mrs Middleton donned her Wimbledon whites in an elegant white broderie anglaise dress, teamed with a tanned pair of wedges – a favourite of her eldest daughters – a brown leather handbag and sunglasses.

Meanwhile, her husband looked smart in a suit as he walked along clutching the couple’s tickets.

The Middleton family never miss a Wimbledon tournament and enjoy the two-week event every year.

The Duchess of Cambridge previously opened up about her love for Wimbledon when she starred in BBC documentary Sue Barker: Our Wimbledon.

She said: “I have watched Wimbledon, that was very much part of my growing up.

“It’s such a quintessential part of the English summer, and I think it really inspires youngsters, myself, it inspired me, when I was younger to get involved in the game. It hasn’t changed either, I think that’s what’s so wonderful.”

It will be a busy week for Mrs Middleton who will celebrate her grandson Prince Louis’ christening on Monday.

Kate, 36, is said to be getting extra help from her mum Mrs Middleton following the birth of her third child alongside Spanish ‘super nanny’ Maria Teresa Turrion Borrallo.

The royal box is reserved for use by the Royal Family and other distinguished guests who want to watch the tennis during the Wimbledon Championships.

Each day 74 guests can take their place on the Lloyd Loom wicker chairs perched just above Centre Court.

Meghan Markle is poised to attend Wimbledon in the next few days  to cheer on her close friend Serena Willams.