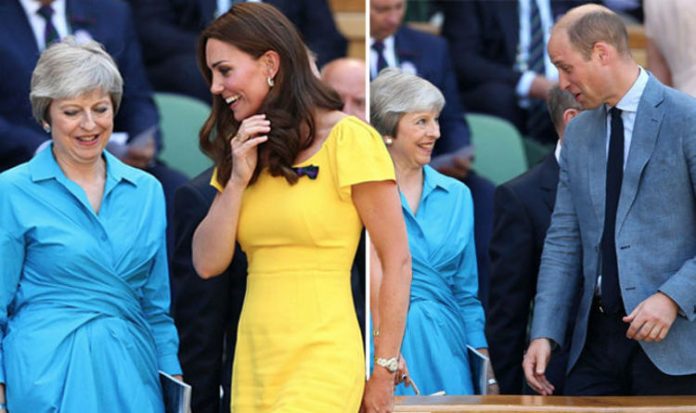 The Prime Minister may be facing backlash from her MPs over her Brexit plan which was released on Thursday, but Mrs May took a moment out of her busy schedule to attended the Wimbledon men’s singles final with Kate and Prince William.

When the royal couple arrived, Mrs May stood up allowing Kate and William to pass in front her to their allocated seats in the royal box at at Wimbledon’s Centre Court.

READ  Ethel Ayler dies at the age of 88

As Kate walked past, the Prime Minister and Prince William was pictured laughing over something one of them had said.

Kate also gave Mrs May a quick smile and William was also seen chatting to the Prime Minister as he pointed towards the court moments before Serbia’s Novak Djokovic and South Africa’s Kevin Anderson arrived for the Championship final.

The Duchess of Cambridge looked radiant in a sunshine yellow dress by Dolce and Gabana as she waved to fans as she arrived to Wimbledon early with Prince William.

READ  UK: Meghan Markle and the Queen: Has the Queen taken Meghan under her wing for THIS reason? | Royal | News

Mr Laver is considered one of the greatest tennis players of all time with 11 Grand Slam titles among his more than 200 titles – the most in tennis history.

Joining Kate, William and Theresa May in the royal box are also actors Hugh Grant and Tom Hiddleston.