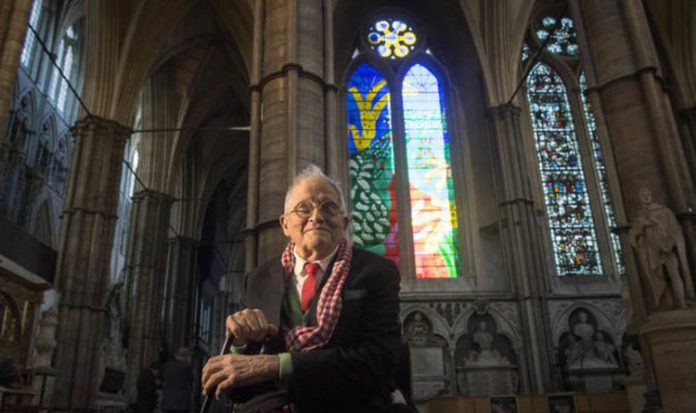 She and other senior royals will see The Queen’s Window for the first time at a remembrance service in November marking the centenary of the end of the First World War.

The 26ft abstract window, depicting a hawthorn blossom in the Yorkshire countryside, was commissioned by the Dean of Westminster, the Very Rev Dr John Hall.

It replaces a plain glass window dating from the Second World War. It is Hockney’s first venture in stained glass and the undisclosed costs were met by private donations.

The 81-year-old said the iPad was natural to use as it is “back-lit like a window”.

But he admitted it was a challenge, adding: “I’ve learned something about glass.” Asked whether he had heard from the Queen, he said: “Not yet, but I hope she’ll like it. I’m sure she will.”

Hockney, who once turned down the chance to paint the Queen’s portrait because he was “very busy painting England actually, her country”, chose a hawthorn as a celebration of spring and summer and said he was inspired by artists Matisse, Chagall, “and a few other people” for the new work.

An Abbey spokesman said: “The subject reflects the Queen as a countrywoman and her widespread delight in, and yearning for, the countryside.”

Dr Hall said: “I’m excited by it. I think there’s absolutely no harm at all in having something which is particular and vibrant and different.

“It’s going to be here until the end. I mean, who knows what’s going to happen in the future? The Abbey’s only been here just over 1,000 years. It’ll be here thousands more.”

Barley Studio, based in York, created the window.

I AM definitely in favour of this piece.

I love the colours.

Hockney, probably the most influential artist of our time, has not deviated from the usual way that he uses his iPad to draw or paint so he is staying true to his preferred medium.

I love the fact that he is using modern technology to design it, but traditional stained glass makers’ style to actually create it.

You can recognise it as a Hockney anywhere.

This is a wonderful use of bright colours and when the sun shines through them it will be like looking at it on the iPad.

Artists throughout history loved creating imagery for and through the church, but this doesn’t have any religious symbolism that you would normally expect to find.

It’s all to do with nature.

Not only does the Queen love the landscape, so does Hockney, coming from Yorkshire.

He chose spring and summer, a time when we are celebrating life, so he is using that time not only to celebrate life, but also the Queen and her reign.

I’m looking forward to standing below the stained glass window to feel the warmth of the colours.

I’m sure it will be a magical moment.

DAVID Hockney joins numerous other famous artists, including Marc Chagall and Henri Matisse, who have created modern artworks in this traditional medium.

However, I was disappointed by the Westminster Abbey design.

Today, what Hockney does best is paint large panoramas of the English countryside.

Fields and hedgerows stretch across space, imagined in dazzling colour.

Here, there is no space.

The hawthorn blossom illustration is crammed into a pair of narrow, pointed panels.

The pathway leading up to the trees is divided disruptively in two by the church architecture.

The image also lacks Hockney’s usual craftsmanship and the scene is too simplistic: abstracted shapes appear awkward and lazily drawn.

Lacking perspective and depth, the window doesn’t draw you in.

I’m guessing he knocked this design up on his iPad in an hour or so.

Less of a landscape, and more of a brightly-coloured decoration, David Hockney’s design lacks feeling, majesty or power.

It also fails to tell a story, which is part of the stained glass window’s sacred role.