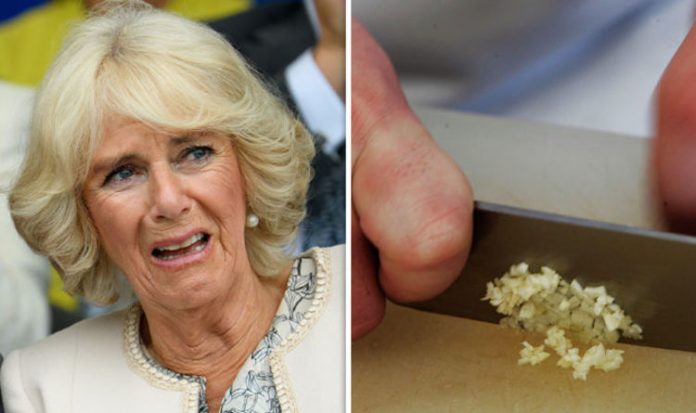 When asked what food royals should avoid, the Duchess said: “I hate to say this, but garlic.

Master Chef host Gary Mehigan then suggested the reason could be that the Royals are constantly talking to people, so they might want to avoid engaging in conversations with an unpleasant breath.

“You just have to lay off the garlic.”

But the Duchess claimed she “always have olive oil” and she has to have tomatoes.

Talking about her favourite ingredients, she said: “If I don’t have fresh tomatoes, then puree.

“And I’m afraid to say even ketchup.

“My grandchildren are rather addicted to ketchup.”

Opening up about Prince Charles’s food habits, the Duchess claimed her husband is a huge fan of cheese.

“Anything to do with cheese, he’ll love… Anything with eggs, with a bit of local vegetables of some kind, he’d love that.

According to Royal chefs, another reason for the ban on garlic may come from none other than Her Majesty the Queen, who simply cannot stand pungent garlic breath.

According to former royal chefs, garlic is absolutely banned in the kitchen of Buckingham Palace.

Former royal chef Darren McGrady said: “We can never serve anything with garlic or too much onions.

“We also couldn’t serve meat that was rare, as she liked her meat more well done.”

John Higgins, another former chef who cooked for the Queen, shared similar thoughts with National Post, saying, “The Queen is a wonderful lady, the Royal Family are wonderful people but they’re missing out on garlic because at Buckingham Palace you don’t cook with garlic.

“I suppose, in case you get the royal burp.”