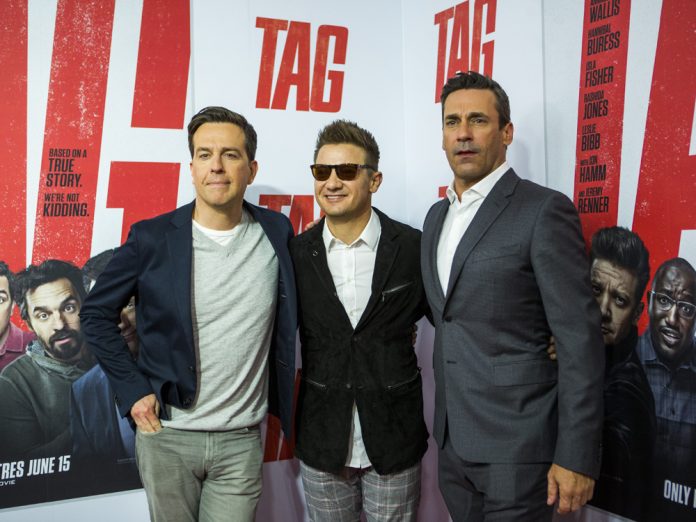 A comedy about a group of pals who’ve been playing the same game of tag for close to three decades? When Mad Men star Jon Hamm heard the pitch for Tag (in theatres today) he thought it was ridiculous — until he found out it was ripped from the pages of the Wall Street Journal.

The film is based on the true story of 10 men who, every February, continue to play a game of tag they started as high school students in Spokane, Wash. Tag trims the group down to five, and flips the action to the month of May.

As the movie opens, Hogan (Ed Helms) goes through an elaborate scheme to tag Bob (Jon Hamm) and to tell him that their boyhood chum Jerry (Jeremy Renner), the only member of the group who’s never been tagged, is getting married later that month. Together with two other friends (played by Jake Johnson and Hannibal Buress), the pals join forces to tag the elusive Jerry before he gets hitched.

Tag also stars Isla Fisher as Hogan’s ruthless wife, Rashida Jones as a long-ago love interest and Annabelle Wallis as the reporter who puts pen to paper to tell the boys’ story.

“I have to be honest with you, I don’t think I would do the movie if it wasn’t based on a true story,” Helms says seated in between Hamm and Renner in a Yorkville hotel. “It’s too absurd. If this had come to me and not been based on truth I would have said, ‘Oh, that’ll be a dumb comedy.’”

Before the comedy’s Canadian premiere earlier this week, Hamm, Helms and Jeremy Renner spoke with the Sun exclusively about turning this unlikely story into a feature film, why it’s important to stay friends with people you’ve known since childhood and how hanging out with an Avenger gets you pretty much into everything.

In terms of crazy true stories, this has got to be right up there with the nuttiest of them. How did you guys react when you heard about this group of friends who have been playing tag for almost 30 years?

Hamm: It was based on a 2013 article in the Wall Street Journal of all places. It was a real bit of happenstance. The (journalist) was set to interview one of these guys about some sort of business-Wall Street Journal-type of thing and during the interview one of his buddies barged in like you see in the movie (laughs). And the interviewer was like, ‘What the hell just happened?’ And he replied, ‘Oh, that was just my friend tagging me.’ He tried to get the interview back on track and the journalist said, ‘No, no, no… we’re talking about that now.’ It serendipitously came out of that. When I read that article I was fascinated. I asked myself, ‘Who are these guys? Why do they do this?’ And when we got to meet them, we realized that they do it because it keeps them young.

Last summer, I saw the headline: ‘Jeremy Renner breaks both arms in stunt accident’ and I just assumed you did that on the set of the Avengers. But you were shooting Tag and it happened on the third day. Did they have to CGI in your arms for the rest of the movie?

Renner: In one scene, the scene I broke my arms in, they had to CGI out the cast on my arm.

Hamm: The day he broke his arm, four hours later he was back on set shooting.

Helms: Fortunately for us, Jeremy is insane.

Do you still keep in touch with high school friends?

Hamm: Yeah, I have a really good close group of friends from when I was basically in seventh grade. We’re all still connected … That shared history is important to keep alive. Especially as you get older. As you make your way through life and life kind of has its way with you, it’s important to remember where you’re from.

Renner: I just have a giant family. My family is so big, so I don’t really have to reach out to friends.

Helms: You also have the Avengers.

Renner: And the Avengers, that’s right.

At the end of the movie, they show scenes of the real guys and some of the stuff from the movie that moviegoers might think are outlandish but really aren’t. Ed, you dress up as an old woman, and one of the real guys does the same.

Maybe not as dirty as The Hangover, though.

Helms: I think there’s a little nudity in there.

What did the real guys think of the movie?

Hamm: Jeremy hosted a party the night before the premiere. It was really sweet. They said that this was the first time that they had all gotten together in one place in like a decade. They got misty-eyed.

What games did you like to play as kids?

Hamm: I played anything. We had this feral group of kids at the apartment complex where I lived. As soon as I got home, you’d drop your books and go play until the streetlights came on. It was whatever the season was. Fall it was football, spring it was baseball, summer it was Frisbee, tag, bike riding … and really whatever the mood in the room was, that was what you did. It was whatever everyone wanted to do.

There are some hilarious ambushes in this movie and lots of laughs. But at its core, this is a story about friendship. What do you hope people take out of Tag?

Helms: Maybe viewers will have a nostalgic pang where they want to reach out to some old friends. That would make it a success.

Hamm: It’s a fun trip to the movies. But it also sticks an emotional landing at the end and I think people will be surprised by that. In a summer where everyone is blowing things up and saving the world and dinosaurs are going crazy, this is not that. This is a fun, funny movie.

Renner: We’re in a landscape right now where everything seems so divided — especially in our country — and this is all about unity. This is a film that unites people and I want to celebrate what unites people.

We all saw the viral video of you guys crashing a wedding in Miami. Who’s idea was that?

Renner: I was invited. They were not.

Helms: A wedding is just positive energy and that’s what we’re about.

So if you want to crash a wedding bring an Avenger?

Hamm: Find your local Avenger, and bring them.