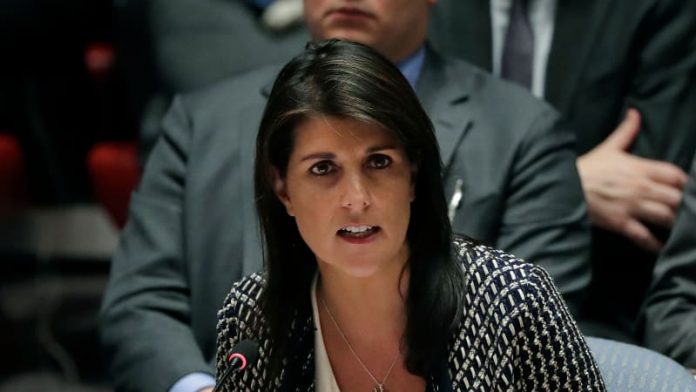 Although numerous officials have said repeatedly that “America First does not mean America Alone,” the administration has retreated from multiple multilateral accords and consensuses since it took office.

Since January 2017, it has announced its withdrawal from the Paris climate accord, left the UN educational and cultural organisation and pulled out of the Iran nuclear deal. Other contentious moves have included slapping tariffs on steel and aluminum against key trading partners, recognising Jerusalem as Israel’s capital and moving the US Embassy to the holy city from Tel Aviv.

Haley has been the driving force behind withdrawing from the human rights body, which would be unprecedented in the 12-year history of the council. No country has ever dropped out voluntarily. Libya was kicked out seven years ago.

The move could reinforce the perception that the Trump administration is seeking to advance Israel’s agenda on the world stage, just as it prepares to unveil its long-awaited Israeli-Palestinian peace plan despite Palestinian outrage over the embassy relocation. Trump’s son-in-law and senior adviser, Jared Kushner, is visiting the Middle East this week as the White House works to lay the groundwork for unveiling the plan.

Last year, Haley warned the Geneva-based council that the US would withdraw if it did not end its systematic scrutiny of Israel and alleged Israeli rights abuses against Palestinians.

She denounced the council as a “forum for politics, hypocrisy and evasion” and accused member countries such as Venezuela, Cuba, China, Burundi and Saudi Arabia of failing to fulfill their duties to “uphold the highest standards” of human rights, while emphasising what she said was the council’s anti-Israel bias.

Since last year, Haley’s office has also pushed the council and its chief not to publish a UN database of companies operating in West Bank settlements, a so-called blacklist that Israel is concerned could drive companies away and cast a further pall over its presence in the Palestinian-claimed West Bank.

Israel is the only country in the world whose rights record comes up for discussion at every council session, under “Item 7” on the agenda. Item 7 on “Israel and the Occupied Palestinian Territories” has been part of the council’s regular business almost as long as it has existed.

The officials said the administration had concluded that its efforts to promote reform on the council had failed and that withdrawal was the only step it could take to demonstrate its seriousness. It was not immediately clear if the US would remain a non-voting observer on the council.

A full pullout by the US would leave the council without one of its traditional defenders of human rights. In recent months, the United States has participated in attempts to pinpoint rights violations in places like South Sudan, Congo and Cambodia.

Reaction to the anticipated move from human rights advocates was swift.

“The Trump administration’s withdrawal is a sad reflection of its one-dimensional human rights policy: Defending Israeli abuses from criticism takes precedence above all else,” said Kenneth Roth, the executive director of Human Rights Watch.

“All Trump seems to care about is defending Israel,” he said, adding that it would be up to the remaining members to ensure that the council addresses serious abuses.

There are 47 countries in the Human Rights Council, elected by the UN’s General Assembly with a specific number of seats allocated for each region of the globe. Members serve for three-year terms and can serve only two terms in a row.

The United States has opted to stay out of the Human Rights Council before: The administration of President George W. Bush decided against seeking membership when the council was created in 2006. The US joined the body only in 2009 under President Barack Obama.

A pullout could be largely symbolic: The United States’ current term on the council ends next year, when it could revert to the observer status held by other countries that are not members. In that situation, the US would be able to speak out on rights abuses, but not to vote.

A key question will be where a US pullout would leave Israel if its biggest and most powerful defender abandons its voting rights or drops out of the council altogether.

The State Department’s website says protection of fundamental human rights was a “foundation stone” for the United States’ creation over two centuries ago and that promoting respect for human rights since has been a “central goal” of US foreign policy.