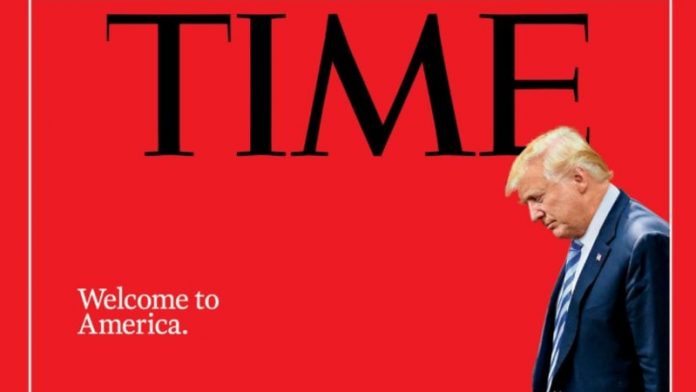 Moore, who has been photographing the American migrant crisis for more than a decade, was tagging along with US border patrol agents who were waiting for a group of Honduran migrants to cross the border.

“[The mother] was told to set the child down while she was searched. The little girl immediately started crying,” the photographer told NPR. “I took only a few photographs and was almost overcome with emotion myself.”

In April, the Trump administration announced a “zero tolerance” policy for illegal crossings, saying that any asylum attempt that is not made at an appropriate port of entry will be deemed illegal and the person will be prosecuted even if they have no criminal history. With the adult detained and facing prosecution, any minors accompanying them are taken away.

The result is that in the six weeks following the police announcement, nearly 2000 minors were detained.

News in recent days has been dominated by searing images of children held in cages at border facilities, as well as audio recordings of young children crying for their parents – images that have sparked fury, and questions of morality and concern from Republicans about a negative impact on their races in November’s midterm elections.

Several Republican legislators joined with Democrats in decrying the policy and imploring Trump to step in. Even the Pope weighed in, saying the separation of children was inhumane and immoral.

Bowing to pressure from anxious allies, Trump signed an executive order on Wednesday ending the process of separating children from families after they are detained crossing the US border illegally.

It was a dramatic turnaround after he falsely said that his administration had no choice but to separate families apprehended at the border because of federal law and a court decision.

He said his order would not end the “zero-tolerance” policy that criminally prosecutes all adults caught crossing the border illegally. The order aims to keep families together while they are in custody, expedite their cases, and ask the Department of Defence to help house families.

Still, Trump’s order is likely to create a new set of problems involving length of detention of families, and may spark fresh court fights.

Further isolating Trump’s position, his wife, Melania, travelled to a detention facility in Texas on Thursday in a surprise trip to show her concern for children who have been separated from their families.

Rachel Olding is a Reporter for The Sydney Morning Herald and The Age based in the United States.