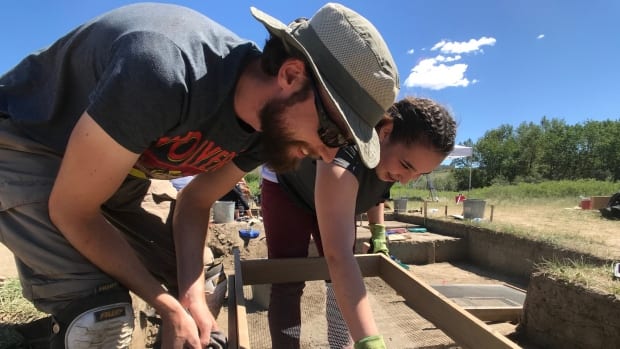 On a warm spring morning in southern Alberta, Kerisa McHugh-Kerr squats on the dusty ground where her ancestors once camped hundreds of years ago.

The 16-year-old is part of a program that brings teens from the nearby Siksika High School to this site to take part in a real archeological dig on traditional Blackfoot land.

“There are no words to describe digging up your own history,” said McHugh-Kerr, as she sifts dirt through a screen, searching for clues as to how her people lived three centuries ago.

This spot — located near the Blackfoot Crossing Historical Park on the Siksika Nation, just outside Cluny, Alta. — was a busy gathering place for the Blackfoot people, as it was the only place for many kilometres where the Bow River could be crossed by foot. 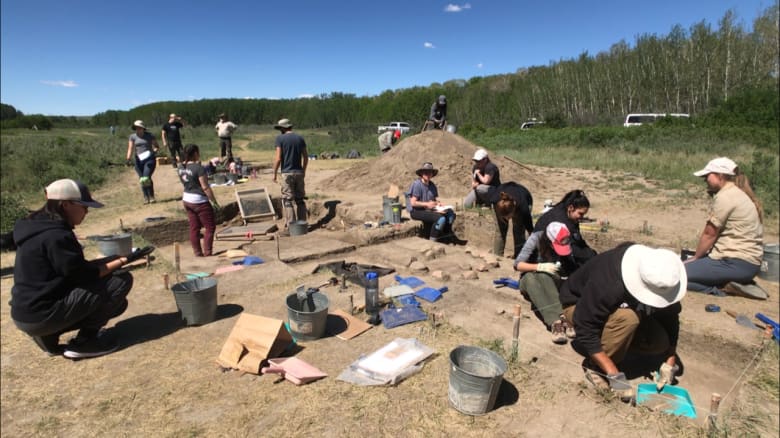 Students from the nearby Siksika High School are taking part in the excavation as part of the University of Calgary’s newly launched Aboriginal Youth Engagement Program. (Erin Collins/CBC)

“The fact that our people used to cross this river, cross this bank to trade,” makes it the ideal place for McHugh-Kerr and her classmates to learn about their past, the Grade 11 student said.

It is a real world classroom that teaches her more than just history, she said. It makes her better prepared to face the future.

“It’s important for me to do this because then I can actually tell my kids and my grandkids that I had a chance to be a part of your ancestors’ way and to give them an understanding of what it [was] like.”

Rekindling the kids’ connection with their traditional land is the reason the University of Calgary’s archeology department started its Aboriginal Youth Engagement Project, of which this dig is a part.

“There is so much history contained in the land all around [the dig site],” said Kelsey Pennanen, a master’s student who helps run the newly launched program. 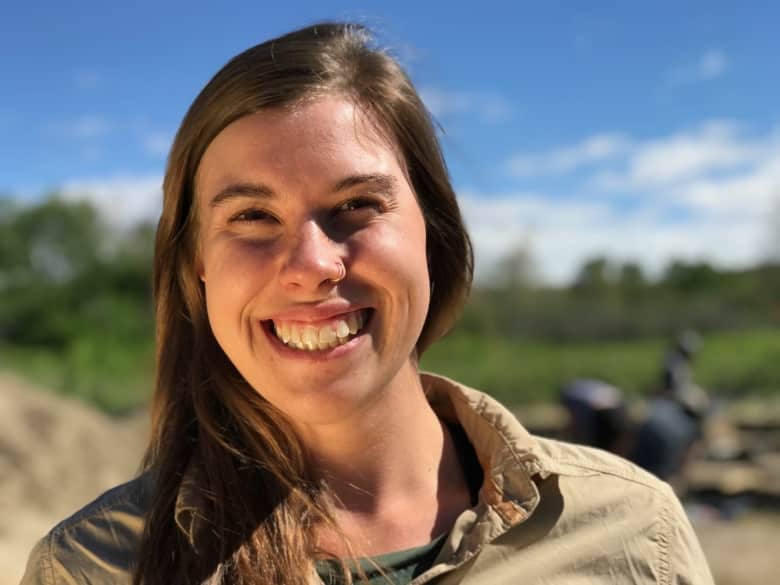 Everyone gets their hands dirty here. High school students and archeologists work shoulder to shoulder to uncover the secrets of the only known prehistoric fortified village on the Canadian Plains.

About 300 years ago, a group of people came to this spot in the heart of Blackfoot territory and built the Cluny Fortified Village, but later abandoned it, said Pennanen.

She said who those people were, and what their relationship was to the Blackfoot, is still a mystery — and one that the archeologists working with the students here are aiming to solve.

It’s also why Pennanen believes that helping to excavate the site gives the kids an amazing opportunity to learn their own history and to “tell those stories themselves.”

It is an opportunity that Lisa Calf Robe never had. Calf Robe said she grew up playing in the trees that ring the dig site but had no idea about the area’s historical significance.

Now a teacher at Siksika High, Calf Robe blames that on being educated in a residential school, where there was “little to no cultural component to her education.”

She said she’s had to “go back and relearn many things that I lost over the years.” 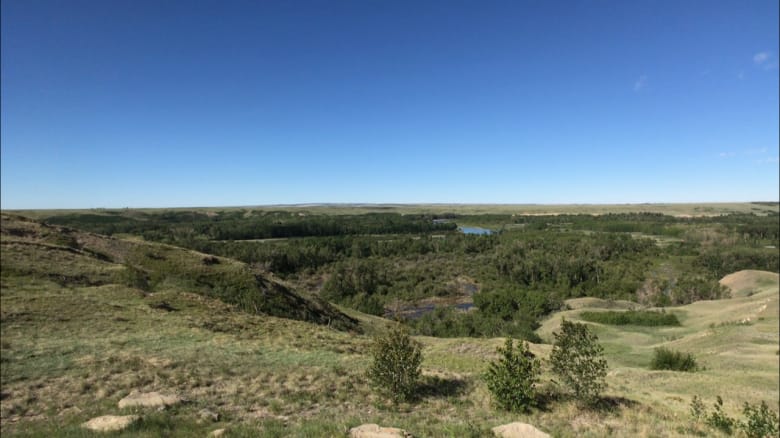 The Bow River is shown running through a valley near Cluny, Alta. For hundreds of years, this area was used as a river crossing for the Blackfoot people. (Erin Collins/CBC)

By taking part in programs like this, Calf Robe said she is hopeful her students will not have to go through that process.

“It’s really empowering for myself as a Niitsitapi​, Blackfoot person; these are things that they are finding in my own backyard,” she said.

Back at the dig site, McHugh-Kerr is using a trowel to carefully scrape away hundreds of years of history, searching for — and then finding — tangible evidence of how her ancestors lived.

“We have found bone that is still trapped in the dirt; we are just trying to pick around it,” she said, describing an earlier find.

It’s an exciting discovery. But by sifting through the past, McHugh-Kerr said she hopes to do more than uncover clues as to how Blackfoot people lived centuries ago: She also hopes to change how her people are perceived today.

“We are not just Siksika, or just Blackfoot, or Indigenous people. We are real people, Siksikaitsitapi, real people.”