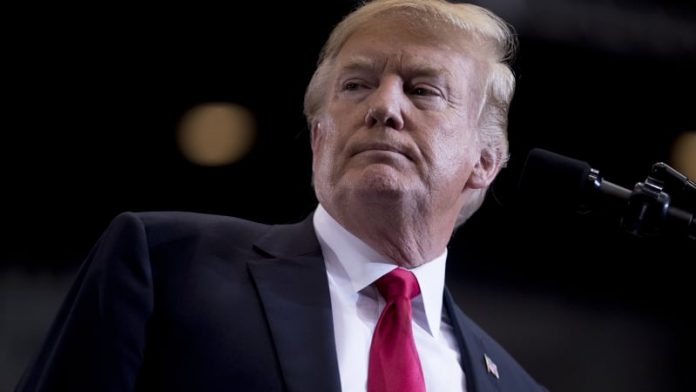 A delegation to McAllen, Texas, was led by senators Jeff Merkley of Oregon and Chris Van Hollen of Maryland. Senator Merkley hasn’t ruled out running for president in 2020, while Senator Van Hollen is in charge of Senate Democrats’ 2018 campaign committee.

“What the President has discovered is this policy, which he put in place six weeks ago, is creating an uproar among the American people,” Senator Van Hollen said in an interview in Brownsville, Texas. “This is something that transcends politics. This is about moms and dads imagining their children being taken from them.”

Trump administration officials say the policy is intended to deter undocumented immigrants from making the trek to the US border with their children. But the President himself has repeatedly blamed Democrats, citing an unspecified law that he says requires children to be taken from parents who cross the border illegally.

White House officials are unable to cite any part of US law that dictates the separations, which were initiated in April after Attorney-General Jeff Sessions announced “zero tolerance” for unlawful border crossings. Adults apprehended after crossing the border outside an official port of entry are to be arrested and prosecuted under Sessions’ decree, which leads to their children being removed.

Previously, border authorities often issued notices to appear in court to families apprehended crossing the border who claimed asylum, then released them. Mr Trump has derided that practice as “catch and release”, arguing that many of the immigrants never appear for court proceedings.

Republicans in Congress and the administration have pointed to a 1997 court settlement regarding the treatment of immigrant children in federal custody for legal justification of the Attorney-General’s new policy.

The US separated about 1995 children from their parents and detained them between mid-April and May 31, according to the Office of Refugee Resettlement at the Department of Health and Human Services, which is responsible for their care. Republican Senator Susan Collins of Maine said on Sunday the number “may well be higher”.

On Friday, Mr Trump hinted in a tweet that the policy was intended as political leverage to force Democratic lawmakers to agree to changes to immigration law containing elements they opposed, including the construction of a wall on the US-Mexico border.

“The Democrats are forcing the break up of families at the Border with their horrible and cruel legislative agenda,” Mr Trump said on Twitter. “Any Immigration Bill MUST HAVE full funding for the Wall, end Catch & Release, Visa Lottery and Chain, and go to Merit Based Immigration. Go for it! WIN!”

In Texas, Senator Merkley said at a news conference that “hurting kids to get legislative leverage is unacceptable. It is evil.”

Democrat representative Mark Pocan, from Wisconsin, who joined senators Merkley and Van Hollen in Texas, said that he thought Mr Trump believed the policy was popular with his political base.

“While he thinks it’s something that works well for that 35 per cent that still adore him, it doesn’t work well for their party in November,” he said in an interview. “I think they’re way miscalculating.”

The first lady issued a statement on Sunday through spokeswoman Stephanie Grisham: “Mrs. Trump hates to see children separated from their families and hopes both sides of the aisle can finally come together to achieve successful immigration reform. She believes we need to be a country that follows all laws, but also a country that governs with heart.”

Former first lady Laura Bush wrote in an op-ed published by The Washington Post late on Sunday: “This zero-tolerance policy is cruel. It is immoral. And it breaks my heart.”

Democrats have refused to consent to the border wall or restrictions to legal immigration that Mr Trump has demanded, and instead hope to block family separations with standalone legislation.

California Senator Dianne Feinstein has the support of 43 senators, all Democrats, for a bill in her chamber. Senator Claire McCaskill of Missouri, one of the most vulnerable red-state Democrats up for re-election this year, said Sunday on Twitter that she would sign onto the bill this week and focus on the issue in her capacity as the top Democrat on the Homeland Security Committee.

Realising the emotional resonance of the issue, House Republican leaders inserted a provision to block the Department of Homeland Security from separating parents and children in an immigration bill expected to be debated this week. The legislation wouldn’t explicitly forbid the incarceration of children alongside their parents.

The fate of that bill is unclear, as the White House has sent mixed messages on whether Mr Trump supports it or an alternative, more conservative immigration measure also expected to receive a vote.

Immigration advocates and Democrats say the administration has made it exceedingly difficult to claim asylum at official ports of entry. Mr Sessions has also ordered that immigrants can no longer be granted asylum based on threats of gang or domestic violence, a major cause of migration from Central America.

Senator Merkley, who drew national attention to the separation policy two weeks ago when officials blocked him from entering the Walmart-turned-detention-center in Brownsville, made a return visit to the facility on Sunday. He also planned stops at a border patrol station and a port of entry.

“Under no moral code, under no religious tradition, is this acceptable,” Senator Merkley said. “And it has to end.”