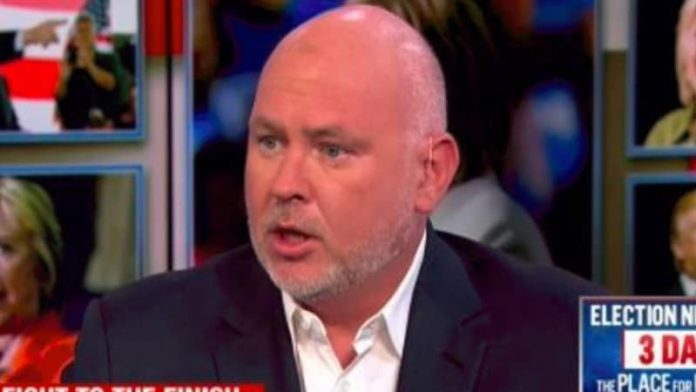 Schmidt, an MSNBC political analyst, is hardly the first prominent Republican to bolt, citing Trump. But GOP expats, united in opposition to the direction of their former party, are divided over what to do next.

Schmidt said he is throwing his support behind Democratic candidates in this year’s midterm elections.

“The first step to a season of renewal in our land is the absolute and utter repudiation of Trump and his vile enablers in the 2018 election by electing Democratic majorities,” Schmidt tweeted. “I do not say this as an advocate of a progressive agenda. I say it as someone who retains belief in DEMOCRACY and decency.”

Joe Scarborough, a former Republican congressman and a co-host of MSNBC’s Morning Joe, left the GOP last year but was not as eager as Schmidt to embrace Democrats.

“I am a Republican, but I’m not going to be a Republican anymore,” Scarborough told Stephen Colbert on CBS. “I’ve got to become an independent.”

“Listen,” he added, “I want lower taxes. I want less regulations. I want a more competitive economy. I want the government taking less money from me, but not at this price.”

Scarborough’s approach to life after the GOP has been to drop the Republican label but hold on to what he described as the “core values” of the party he once knew.

Conservative Washington Post columnist George F. Will has done the same. Will changed his voter registration from Republican to unaffiliated in June 2016, the day after House Speaker Paul D. Ryan endorsed Trump.

“This is not my party,” he said at the time.

Will remains critical of Trump but also continues to write from a Republican point of view.

Then there is the case of Mary Matalin, the former George H.W. Bush deputy campaign manager, who ditched the Republican Party and registered as a Libertarian when Trump became the GOP’s presumptive nominee in the spring of 2016. At the time, Matalin expressed ambivalence about Trump and said her party had shifted under her feet.

“Everyone keeps saying that Trump hijacked the party,” Matalin told Glenn Beck, another conservative Trump critic. “How about we left the keys in the car with the motor running? It’s not a Jeffersonian, Madisonian representative republic – that’s not what the party represents anymore. I didn’t leave it; it left me.

Matalin has since become an enthusiastic Trump supporter. In March, she told PJ Media that Trump is a “great overall president” and said she could “die happy now”.

For ex-Republicans, there is no single path – nor even a single take on the president who contributed to their disenchantment with GOP, in the first place.