Armed police shot a man after a possible terrorist attack sent hundreds of people running for their lives in the heart of London.

Several victims have been injured in what appears to have been a stabbing spree by an attacker armed with a machete.

The Metropolitan Police have revealed that the suspect who was shot was wearing a fake suicide belt.

Dramatic footage shared online appears to show members of the public bravely disarming the suspect on London Bridge itself.

Other videos have shown armed police sprinting to the scene, while shouting at people to leave the area and get indoors.

A police spokesperson has confirmed the suspect died at the scene after being shot by City of London Police officers and that the incident is being treated as a terror attack.

"I’m being kept updated on the incident at London Bridge and want to thank the police and all emergency services for their immediate response." — Prime Minister Boris Johnson

A tweet from the London Ambulance Service described it as a major incident. U.K. leader Boris Johnson tweeted that he was being kept updated on the incident. He later thanked the emergency services and members of the public for their “immense bravery in responding to this suspected terrorist attack at London Bridge.”

“This is an appalling incident and all my thoughts are with the victims and their families,” the U.K. leader said. 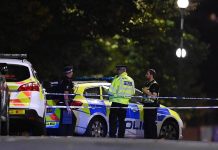