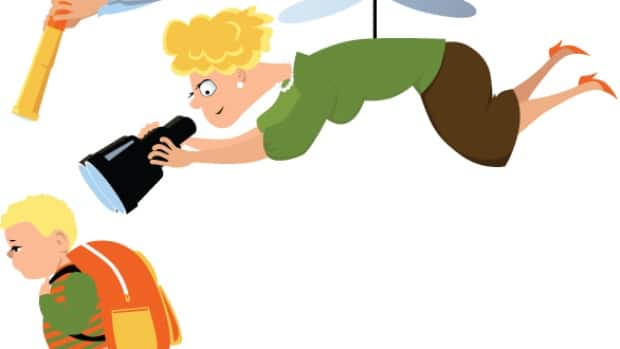 This is an excerpt from Second Opinion, a weekly roundup of eclectic and under-the-radar health and medical science news emailed to subscribers every Saturday morning.

If you haven’t subscribed yet, you can do that by clicking here.

Are you one of those “helicopter parents?”

The kind who is overprotective when it comes to their children?

The ones who micromanage them? Who set up all their play dates, hover and smother their children?

Well, don’t beat yourself up.

It’s natural for parents to do whatever they can to keep their children safe and healthy, says Nicole Perry, from the University of Minnesota. She’s the lead author of a study published this week in the journal Developmental Psychology.

Perry also says that kids need space to learn and grow on their own, “without Mom or Dad hovering over them.”

Her study found that over controlling parenting can negatively affect a child’s ability to manage his or her emotions and behaviour.

“Our research showed that children with helicopter parents may be less able to deal with the challenging demands of growing up, especially with navigating the complex school environment,” she says. “Children who cannot regulate their emotions and behaviour effectively are more likely to act out in the classroom, to have a harder time making friends and to struggle in school.”

For her research, Perry and her colleagues in the U.S. and Switzerland followed the same 422 children for eight years. They assessed the kids at ages two, five and 10, tracking their social and emotional development.

In one of the tests, researchers watched parents play with their two year olds in a lab. During this “pretend play,” the moms were instructed to play with their kids and an array of toys, just like they would at home.

As expected, researchers witnessed the telltale signs of helicopter parenting.

Parents guided their kids by telling them which toy to play with, how to play with it, and how to clean up afterwards. And surprise! Some of the kids didn’t like it one bit. They acted out. Some were defiant; others were frustrated.

Researchers discovered that when those two year olds turned five, they had less control over their emotions and mental states. That difficult behaviour followed them right through to age 10.

Another part of the study included getting the 10 year olds to fill out questionnaires.

“Specifically, we had them rate their attitude toward school and their teachers, their worry or distress related to social situations, their level of perfectionism, nervousness, feelings of fear and worry, as well as depressive symptoms and sense of inadequacy,” Perry told CBC News in an email.

“Children who developed the ability to effectively calm themselves during distressing situations…had an easier time adjusting to the increasingly difficult demands of preadolescent school environments, says Perry.

“I like that kind of study, because it follows the same group of kids over eight years,” says Kelly Dean Schwartz, an associate professor in the School and Applied Child Psychology Program at the University of Calgary. That’s interesting to see — how that parent-child relationship changes. How the expectations for the child change.The data is now suggesting that hyper attempts at control and protection is actually showing itself to be harmful.”

Schwartz has done his own research on “helicopter parenting.” For the record, he prefers the terms “overprotective” or “intrusive” parenting.

“You know, these are not bad parents, these helicopter parents,” he tells CBC News over the phone from Calgary.

“They’re concerned about their kids.They’re thinking they’re doing the best for their kids.”

He says being good parents is not an exact science, and the challenge is to find what he calls “the sweet spot,” especially as children grow up.

That includes allowing for “responsible risk,” he adds. “What can we do as parents to allow our kids to safely fail? Am I giving my kids the opportunity to actually recover from a failure?”

Schwartz is a father of three adolescents, so he’s done some of his own “self checking” when it comes to micromanaging.

“You know what? I need to let them solve this on their own. I take off my researcher hat, and put on my parent hat and go, ‘Am I really doing what is best for our kids?'”