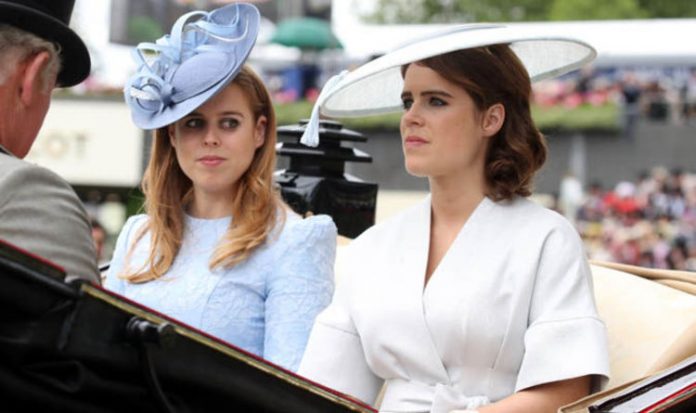 Princess Eugenie was spotted alongside her sister Princess Beatrice at the races yesterday.

But while Harry and Meghan caused a stir with their endearing hand holding and stolen looks, it was Eugenie’s outfit choice which caused shocked reactions.

The bride-to-be looked glowing and bridal at Ascot yesterday, sending tongues wagging that she could be hinting at her wedding look to come.

The 28-year-old wore a metallic silvery-white dress by London designer Osman, which featured a midi hemline and kimono-inspired silhouette.

She topped the look off with a wide-brim Emily London hat, also in white.

The princess looked relaxed and happy, enjoying the royal day out – while commentators began speculating over her upcoming wedding.

However, some royal-watchers have criticised the dress for being too frumpy on her small frame, so she may pick something sleeker for her wedding day.

Meghan Markle, the Duchess of Sussex, reportedly chose Givenchy’s Clare Waight Keller to design her wedding dress as early as January, four months before her wedding

Eugenie’s nuptials are now just five months away, meaning her hunt to find her dream wedding dress is likely to ratchet up to full throttle.

Meghan may have been nervous for her first Ascot, but Eugenie is something of a veteran, attending the races every year.

Her older sister Beatrice is usually spotted at the races too, and this year was no exception.

The 29-year-old royal wore a periwinkle blue dress by Clare Mischevani and a matching fascinator by Juliette Botterill.

What is the dress code for Ascot?

For the Royal Enclosure, women are required to wear dresses that fall on the knee or longer and straps need to measure one inch or greater.

Women may wear trouser suits and jumpsuits, but they must be full-length to the ankle.

Hats or fascinators need to be worn.

For the men, they need to wear a black or grey morning suit, including a waistcoat and tie, top hat and shoes with socks.