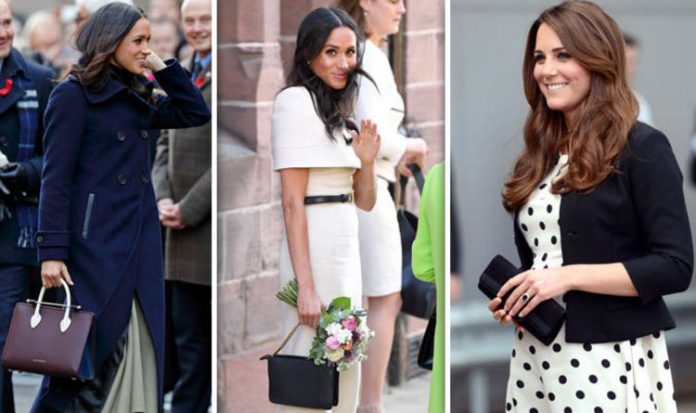 Meghan has already proved her worth in the fashion stakes, with anything she wears selling out in minutes.

Kate is also known to have the same influence when she dons high street finds, with the Duchess of Cambridge having previously opted for dresses by Topshop and Reiss, and becoming infamous for her LK Bennett shoes.

But fashionistas have often pointed out the Duchess of Cambridge only chooses to carry clutch bags, giving her something to hold with her two hands during her public appearances.

Instead, Meghan has so far adopted a wider range of bags, and has often gone for accessories that leave her hands free.

This shows the Duchess of Sussex hasn’t lost her quirkiness and friendliness after marrying Prince Harry on May 19 and officially joined the Royal Family, a fashion expert said.

READ  Entertainment: Shootings in the history of rap (News)

Arguing Meghan’s bags express her “openness and affability”, Bethany Harmer, fashion editor at Jules B told Express.co.uk: “Often choosing larger bags over clutches while out in public shows that she doesn’t like to be restricted by bags without handles, preferring to keep her hands free to allow for more relaxed and meaningful interactions.

“Meghan has people to carry essentials for her so she certainly doesn’t need a larger bag, but she chooses to accessorise with trendy totes and cross-body bags that have a more relaxed feel, making others feel at ease around her.”

Her choices with bags make Meghan the “bravest royal yet”, unwilling to give up to her individual sense of style.

Ms Harmer said: “We can see through her choice of handbags that Meghan’s style differs considerably to her sister-in-law’s, particularly in her preference for cross-body bags, which bolster her self-sufficient image.

“Handbags are not usually worn across the body by royals as this creases their clothes while they are on the move, but Meghan has repeatedly opted for these styles for their functionality.

“From Meghan’s first public appearance with Harry, when we saw her in a pair of distressed jeans, it’s been clear that she follows her own rules and has a real sense of independence as well as a fun, easy-going personality.”

But Meghan, a former actress, didn’t ditch her habit to get close to fans and supporters, and is adopting bags that don’t create a barrier but rather allows her to be approachable.

Ms Harmer said: “During public appearances she tends to opt for larger handbags with handles, staying true to her personal sense of style and allowing herself the freedom to shake hands with, or even embrace, members of the public.”

This represents a huge difference with the Duchess of Cambridge, who has been said to choosing clutch bags to avoid “awkward moments”.

Etiquette queen Mike Meier, founder of Beaumont Etiquette, explained Kate’s choice saying: “When the Duchess is at an event, she holds her bag in front of her in both hands when shaking hands might be awkward.”