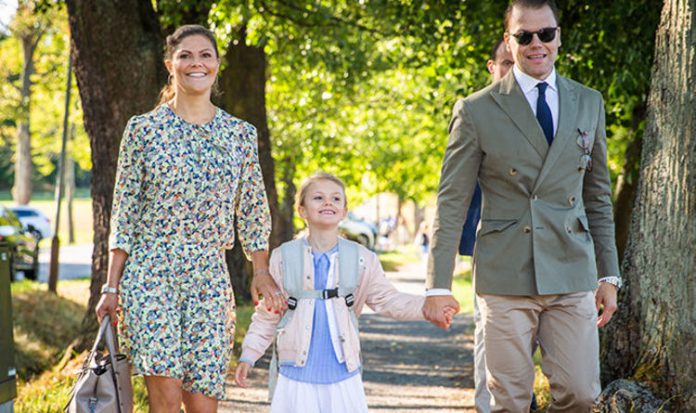 The six-year-old princess walked hand-in-hand with her proud parents as she arrived for her first day at Campus Manilla.

The school is funded by the Swedish government, but has become a top school for the Swedish elite.

The royal couple’s eldest child looked delighted as she bounded on to a yellow and red train, which took she and her classmates to the school gates, after kissing her mum and dad goodbye.

Without a uniform to adhere to, Princess Estelle looked adorable in a pretty blue blouse, white skirt and a light pink jacket, teamed with a new backpack.

Her mother Princess Victoria, 41, looked glamorous in a floral play suit and silver strapped-heels as she waved her daughter off at the school gates.

The photos included one of Estelle, who smiled happily, as she settled in at her desk in class.

Estelle, who is next in line for the throne after her mother, is starting preschool classes at the school, with children in Sweden beginning full education aged seven.

Speaking about the royal couple’s decision to send their eldest child to the school, spokesman Margareta Thorgren told Swedish newspaper Expressen: “It’s a decision the Crown Princess Couple has taken.

“Nobody in the royal family has gone there before, it’s a relatively new school.”

Before embarking on her first day at school, Estelle enjoyed a family holiday with her two-year-old brother, Prince Oscar, and their parents at Soliden Palace in Oland.

The family of four were pictured in stunning snaps released by the palace earlier this week.

There, Estelle and her brother enjoyed boat rides, walks in the woods and moments with their family pony Viktor.