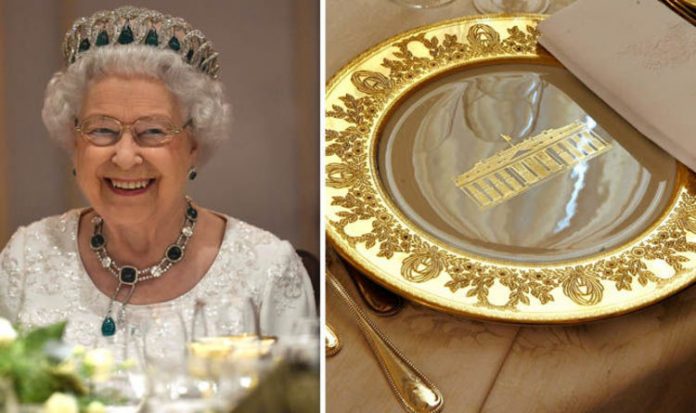 In fact the monarch prefers to spend her time and money on her beloved horses than in the kitchen, Buckingham Palace chef Darren McGrady said.

The 56-year-old royal chef learnt a lot about the Queen’s eating habit as he cooked meals for the head of state and her family for over a decade between 1982 and 1993.

During this time, he worked out the monarch’s secret to stay healthy and fit despite the many luxurious lunches and dinners she has to attend for state reasons.

When she is on her own, Queen Elizabeth II asks for grilled or poached fish accompanied by vegetables and a simple salad, avoiding as much as possible potatoes or starch.

Chef McGrady added: “That’s it. That’s all she has.

“She could have anything she wanted, but it is that discipline that keeps her so well and so healthy.”

According to the royal chef, the Queen simply eats to live rather than living to eat.

And proof of this frugality and lack of fussiness is seen in the state of the royal kitchen.

“They’re still using pots and pans from the 1800s, with the Queen Victoria stamp on them, at Buckingham Palace.”

He confessed during his decade at Buckingham Palace he has asked if royals could buy his staff some modern kitchen utensils, but he often received a no as an answer.

He said than when asked if they wanted to buy some new “pots and pans”, royals would say “no, no, no, we need the money to buy horses and saddles”.

Mr McGrady added: “The Queen is not really bothered about food.

“All she cares about are horses and dogs.”

Examples of the Queen’s frugality can be found also outside of the kitchen.

Last year she was pictured in Buckingham Palace next to a £30 heater while presenting an award to English poet Gillian Allnut.

And palace insiders have revealed light bulbs more than 40 watts are banned from the splendid palace.

The Queen cuts down expenses even when they concern her loved horses, as she uses shredded pieces of old newspapers as bedding for them, they added.