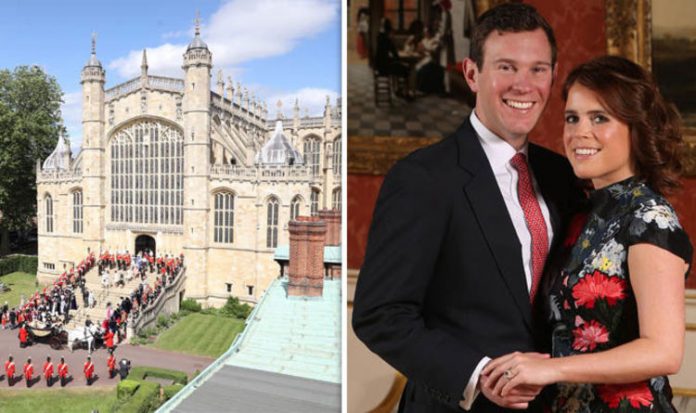 The Royal Wedding of Princess Eugenie and Jack Brooksbank will take place on October 12 this year, the second of its kind since Harry and Meghan in May.

Prince Harry and Meghan Markle’s ceremony was marked by appearances from huge names such as David and Victoria Beckham, and Elton John.

Popular royal Eugenie is hoping to create a spectacle with her own wedding, which is set to be crammed with some huge names and, according to a royal insider, up to 850 guests.

Among them are close friends of the Princess Ellie Goulding and Cara Delevingne, as well as Amal and George Clooney.

How many guests will be at Eugenie’s wedding?

Rumour has it that the princess has invited up to 850 people, in a claim made by an anonymous source on the Mail on Sunday.

Princess Eugenie will be tying the knot at the same venue as cousin Harry, the Duke of Sussex, and wife Meghan Markle, the Duchess of Sussex, at St George’s Chapel in Windsor.

This could prove a problem for her 850 guests, as the venue only has enough space for 800.

A source told the Daily Mail: “The wedding itself is going to be huge and they are hoping quite a few of the people they’ve invited won’t be able to come because of the capacity issue.”

The capacity issue could see some of Eugenie’s guests step aside, meaning the princess may have to pick and choose who is able to attend.

However, it seems that Eugenie will not have to cut down on her guests at all, a royal expert said.

An alternative to slashing guest numbers simply is that extra space will be found in the chapel for her 850 guests.

According to James Brookes, Director of Broadcasting and Communications at Royal Central, Eugenie will likely have accommodations made around her.

Talking to Express.co.uk, Mr Brookes said: “I would have thought Eugenie wouldn’t invite more people than can be seated comfortably in the Chapel.

“Of course, seating for 800 is much bigger than the typical wedding and given this one isn’t going to be as big as Harry and Meghan’s – plus there’s no need for inviting dignitaries either – I would have thought everyone she wants to be there will have a seat.”

Despite breaking with the traditional seating numbers in the chapel, Eugenie’s 850 guests should be able to watch her tie the knot.

However, the actual numbers of invitations sent out is much bigger than 850, as Princess Eugenie has also invited members of the public to celebrate her big day on the grounds of Windsor castle.

A recent announcement from Buckingham Palace has extended Princess Eugenie and Jack Brooksbank’s invitation to 1,200 more people, mirroring what Meghan Markle and Prince Harry did for their Royal Wedding on May 19.

The statement from the palace reads: “Princess Eugenie and Jack Brooksbank would like to invite members of the public to join their wedding on 12 October, 2018 to attend inside the Precincts of Windsor Castle.

“1,200 members of the public will be able to view the arrival of the congregation and members of the royal family, listen to a live broadcast of the marriage service, and watch the start of the procession as the couple depart at the end of the wedding ceremony.”

Those attending had to register via a ballot – which is now closed – that saw more than 100,000 people sending their application hoping to be chosen.