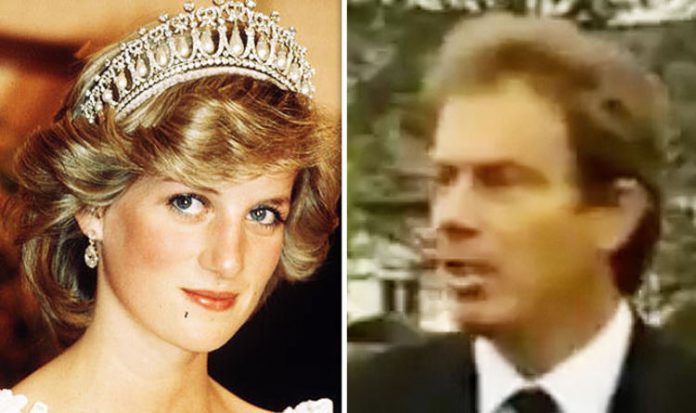 The former Labour leader’s heartfelt speech in tribute of Princess Diana moments after her death increased his approval rating to 93 percent.

In his speech, Tony Blair branded the Princess of Wales “people’s Princess” as he praised Diana for the depth of her compassion and humanity.

He said: “Everyone else in this country today is utterly devastated.

“Our thoughts and prayers are with Princess Diana’s family, in particular, her two sons, her two boys.

“Our hearts go out to them.

“We are today a nation in Britain in a state of shock, in mourning, in grief.

“It is deeply painful for us. She was a wonderful and warm human being.

“Though her own life was often sadly touched by tragedy, she touched the lives of so many others in Britain and throughout the world, with joy and with comfort.

“How many times should we remember her in how many different ways with the sick, the dying, the children, with the needy.

“When with just a look or a gesture that spoke so much more than words she would reveal to all of us the depth of her compassion and her humanity.

“You know how difficult things were for her from time to time, I’m sure we can only guess that but the people, everywhere, not just here in Britain, everywhere they kept faith with Princess Diana.

“They liked her, they loved her. They regarded her as one of the people.

“She was the people’s Princess.”

A small crowd gathered on Friday at the gates of Kensington Palace on Friday to place flowers, cards and balloons in her memory.

Some of those attending the informal memorial wore patriotic union flag clothing.

One left a gold balloon with the poignant message: “Her legacy lives on through her sons.”

Diana died aged 36 in a high-speed car crash at the Pont de l’Alma tunnel near the River Seine in Paris on August 31, 1997.

Two other people in the car were pronounced dead at the scene – French driver Henri Paul and her boyfriend Dodi Al-Fayed, 41.

On the evening of the day she died, Diana and Dodi were dining in the Imperial Suite at the Ritz Hotel in Paris.

The couple had hoped for a quiet, romantic meal, but were forced to leave after just 10 minutes because of constant interruptions.

At 11.30pm Diana and Dodi left the hotel to head for his apartment in Paris and were immediately surrounded by paparazzi, despite massive precautions being taken beforehand.

Limousine driver Henri Paul sped through central Paris’ narrow streets and it was later estimated the car was travelling at 60mph.

At 12.19am the car crashed into the 13th pillar of the Pont d’Alma Bridge.

Diana was rushed to Paris’ La Pitie Salpetriere Hospital, but she was pronounced dead at 4am.