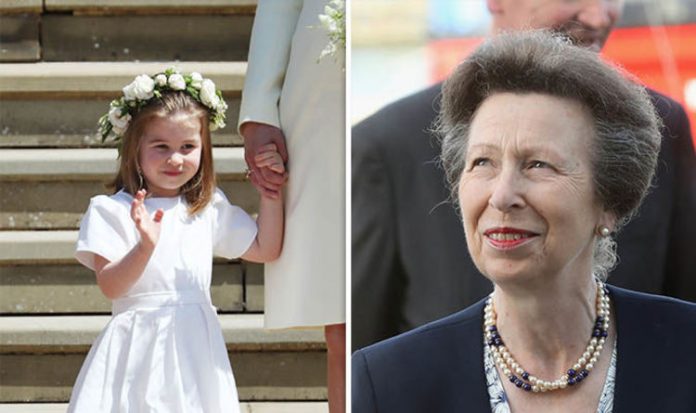 The adorable three-year-old’s current title is Her Royal Highness and may have to wait a while to get the title Princess Royal for this simple reason.

Royal historian and founder of Royal Musings Marlene Koenig said: “William will need to be king and Princess Anne dead for Charlotte to be named Princess Royal.

“So yes it is possible in the future.”

However, even after the 67-year-old dies Charlotte will not automatically get the title Princess Royal.

It will be up to her father, Prince William, to give it to her if and when he decides to.

And he will have to be king.

Princess Anne received the title of Princess Royal in June 1987 when she was 36.

However, the royal accepted the title Princess Royal in what appears to be an effort to get rid of her ex-husband Mark Phillips’ name from her title.

Ms Koenig told Hello!: “There is a lot to be said for the timing.

“The Phillips marriage was already in trouble.

“They separated two years later, but in 1985, Mark became a father of Felicity Tonkin, born in New Zealand.

“This story broke in 1991, but there is no doubt that Anne already knew as Heather Tonkin had called Gatcombe to tell Mark that she was pregnant.

“Accepting the title of Princess Royal allowed Anne to stop being styled as HRH The Princess Anne, Mrs. Mark Phillips.”

Queen Victoria gave her eldest daughter Victoria the title when she was just two-months-old.

The first Princess Royal was Mary, the daughter of Queen Henrietta Maria and King Charles I in 1642.

Queen Henrietta Maria, the daughter of Henry IV, King of France and her husband King Charles I wanted to imitate the way the eldest daughter held a title similar to the King of France, which was styles as “Madame Royale”.