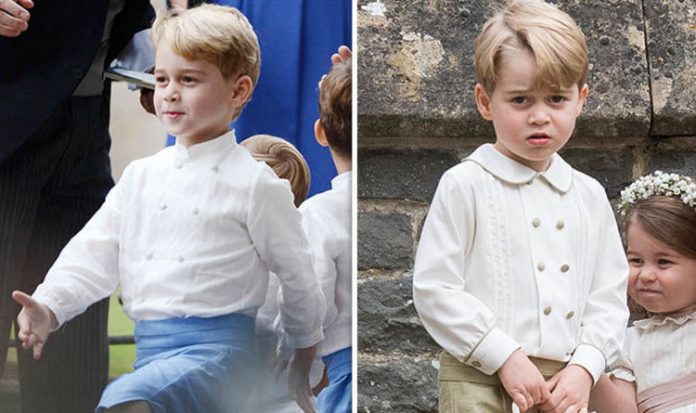 And just a year on from taking on the same duty at his auntie Pippa Middleton’s 2017 Royal Wedding, it is clear to see how much the five-year-old prince has grown up.

Confident and charming, five-year-old George left guests in hysterics as he showed off his marching skills outside St Andrew’s Church in Letheringsett, Norfolk, on Saturday.

Prince George looked adorable in a collarless white shirt, sky-blue knickerbockers, white stockings and white loafers, a near identical outfit to the one he wore at Kate’s sister’s wedding in May last year.

The young prince’s playful display on Saturday was a far cry from his appearance at Pippa’s wedding to James Matthews where he was snapped in tears after a stern telling off from his mother, the Duchess of Cambridge.

But this year, George took on a leading role, albeit playful, in games with the other children outside the Norfolk church.

This was all to the amusement of the other wedding guests and proud mum Kate, who beamed as she kept an eye on the bridal party.

One onlooker told The Sun: “George was having a great time, running around like the leader of the pack.

“He was loving his responsibility and played up to the crowd.

“At one point everyone chuckled as he began marching about.”

Whereas George’s younger sister and bridesmaid, Princess Charlotte, appeared unimpressed at her brother’s antics and at one point clung on to her mum for comfort.

Prince George and Princess Charlotte are no strangers to having a starring role at weddings – they were also a pageboy and flower girl at their uncle Prince Harry’s Royal Wedding to Meghan Markle in May.

It has been a big year for the Cambridges, who welcomed their newest member Prince Louis into the world on April 23.

The family are expected to be seen out in public at another wedding – Princess Eugenie’s royal nuptials to Jack Brooksbank in October.

Duchess Kate and Sophie were schoolgirls together at Marlborough College and Sophie is also one of Charlotte’s godmothers.

Kate’s parents, Carole and Michael Middleton and brother, James, were also guests at the wedding in Norfolk.