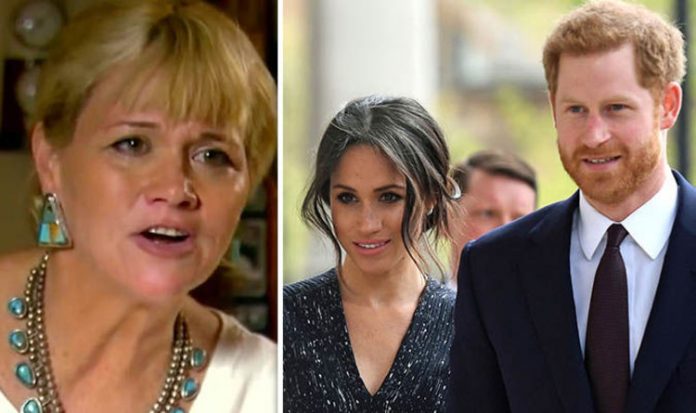 The Duchess’ estranged half-sister launched her latest scathing attack against Meghan after Mr Markle Snr claimed he was told he could not deliver a speech at his daughter’s Royal Wedding.

In a string of tweets addressed directly to Kensington Palace, Samantha issued a warning to the Duke of Sussex, claiming their marriage won’t last.

She wrote: “If you treat your own father like this, Harry is next.”

She added: “There would be no just reason for her not to want him in her life, as he was good enough to use to make her everything she is.

“She should be grateful. Her diplomacy skills suck and are inhumane.

“Freezing people out is the best way of hiding the truth.

“There is no room for a greedy arrogant, deceitful fake humanitarian on this world stage.

“How dare she? Disgusting.”

Samantha’s tweets comes after Mr Markle Snr spoke once again to the press, revealing what he wished he could have said at her daughter’s wedding.

He said: “Like any father, I wanted to say a few words.

“I was going to recount the funny story about how she broke the news to me about dating Harry: ‘Daddy, I’ve met a man… Daddy, he’s English… Daddy, he’s a prince’.

“I thought it was a cute story.

“I was going to thank the Royal Family for welcoming my beautiful daughter into their family.

“But it was a speech that I was never going to be allowed to give. That hurt.”

Mr Markle Snr didn’t attend the wedding after suffering an heart attack days before the Windsor ceremony on May 19.

In an interview he also claimed his relations with Meghan started crumbling three months ago, when the Duchess asked him to stop speaking to his other outspoken sister, Samantha.

“I have two daughters. I can’t stop talking to one of them.

“No father should be asked to turn his back on their children.

“I love Meghan but I also love Samantha.”

Samantha had already accused Meghan of behaving badly to their father.

Accusing her of not helping Mr Markle Snr in a period of financial distress, she said: “Honestly what she could spend in a weekend would greatly help Dad, so that should be a priority.

Weeks later, she blasted the Duchess for cutting their father out of her life.

Arguing Meghan should help Mr Markle Snr just as much as she helps other people in need with her humanitarian work, Samantha wrote on Twitter: “Glad you have so much time to gallivant around paying tribute to others while ignoring your own father!

“How cold can you be and look in the mirror?”