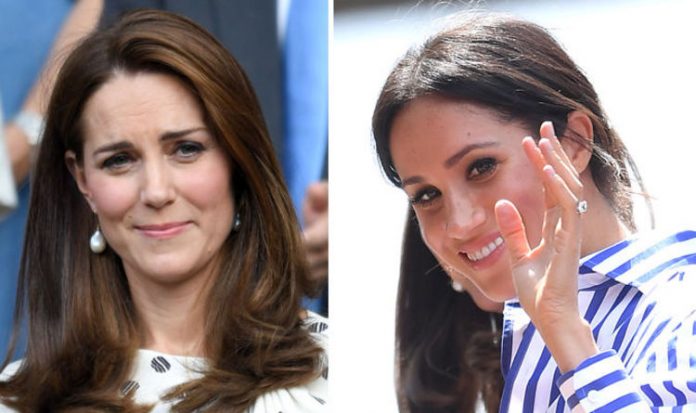 Examining the sisters-in-law at Wimbledon, Ms James said it is clear they share a close bond which is due to the unusual situation they have found themselves in.

It is also partly due to Meghan Markle adopting Prince Harry’s fun personality.

Ms James said: “Kate is always very much the pitch-perfect princess in terms of her regal-but-warm-looking body language and the levels of confidence she displays at royal events.

“Her Achilles heel was always Harry who often looked duty-bound to make her laugh or giggle and it seems from the body language here that Meghan might be adopting a similar role to try and forge a familiar and very congruent friendship with her sister-in-law.

“While Kate sits smiling as she watches the tennis, Meghan face-checks her closely in what looks a little like admiration bordering on hero-worship.”

The expert claimed the trait would suggest she’s keen to take her lead from Kate.

She added: “Meghan’s raised brows, wide eyes and her clapping hand gesture shows a genuine excitement for the event and the company and when she turns her very contagious grin on Kate you can see a possible hint of some growing behind-the-scenes fun between the two women.”

Ms James also said the women are truly friends and not just for the camera.

Although both women are 36, Ms Markle acts a lot younger, according to the body language expert.

Speaking to The Sun, she continued: “The smiles entail rounded cheeks and eye-crinkling that lets us know they are authentic.

“It’s what each woman does with their smiles that defines them as two rather different personalities.

“While Kate keeps her eye contact down or to the side, Meghan’s eyes to the crowds and her dipped head and rather shy, lowered smile forms what is known as ‘The Cute Effect’, a trait of using pseudo infantile body language to lower your own status and form instant bonds of likeability.

“So although these two women are the same age Kate’s signals make her look more grown up than the very excited-looking Meghan.”

Kate, who is currently on maternity leave, is the more experienced royal of the two, having married Prince William back in 2011.

She waved to crowds as she entered alongside Kate, who wore a white dress.