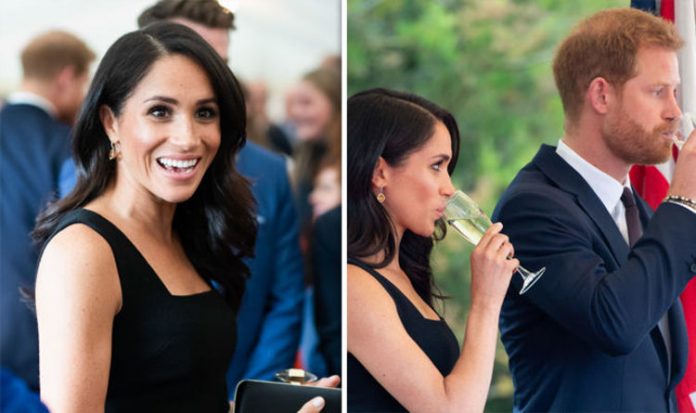 Irish Senator Catherine Noone of Fine Gael tweeted about the interaction she had with the Duchess of Sussex.

She claims Ms Markle told her she was “pleased” with Ireland’s decision to legalise abortion and repeal the Eighth Amendment.

Members of the Royal Family are not supposed to offer opinion on matters of politics and should be politically neutral at all times.

The Senator tweeted: “A pleasure to meet Prince Harry and the Duchess of Sussex at the British Ambassador’s Residence this evening.

“The Duchess and I had a chat about the recent referendum result.

“She watched with interest and was pleased to see the result.”

She shared the message alongside a photo of her chatting with the Suits star on her first official visit abroad since the Royal Wedding.

In May, Ireland voted to legalise abortion.

This reversed the Eighth Amendment to the Constitution included in 1983 which recognised equal right to life for the mother and the unborn child.

The Senator was swiftly reminded by other Twitter users that she could have landed the Duchess in “hot water”.

One Twitter user fired back: “You may have landed her in hot water there.”

Jean B claimed that it would be a “major faux pas on Meghan’s part”.

Ms Noone responded an hour and a half later and posted a second tweet in an attempt to justify the political chat.

She said: “I should say she seemed pleased.

“She was interested and very measured, not political at all.”

Later in the evening, the Senator deleted the stream of tweets entirely and replaced them with a simpler message with no suggestion of the Duchess breaking the rules.

She posted on the social media site: “A pleasure to meet Prince Harry and the Duchess of Sussex at the British Ambassador’s Residence this evening.”

Meghan and Prince Harry are on a two day trip to Ireland, marking Meghan’s first ever international engagement as a member of the Royal Family.

They were greeted by Prime Minister Leo Varadkar on Tuesday afternoon, before attending the event at the British Ambassador’s residence.

It is not the first time Meghan has been close to the bone when discussing politics.

Earlier this year, she made comments about women’s empowerment at a Women’s Foundation panel.

The Duchess said: “Right now with so many campaigns like MeToo and Time’s Up there’s no better time to continue to shine a light on women feeling empowered and people supporting them.”