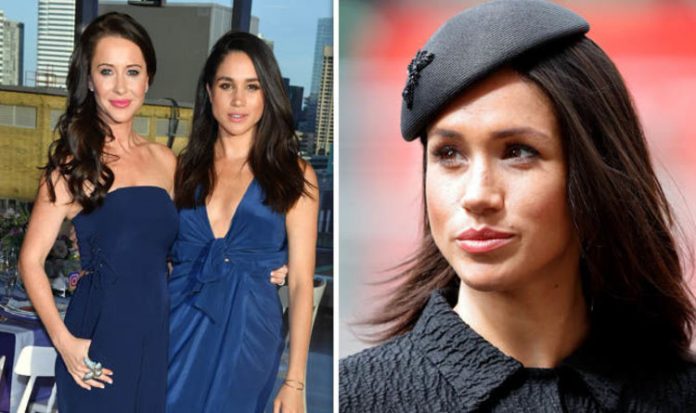 The Duchess headed to Canada in secret to visit her best friend Jessica Mulroney and her family, the sources added.

Despite Kensington Palace denying Meghan was leaving the country for any personal trip, sources insist the Duchess took some time off to catch up with Jessica, Ben and their three children.

“Meghan and Jessica spent their days catching up, lounging poolside and playing with children Ivy, Brian and John, who, adds a source, ‘love seeing their Auntie Meg.’

“There was also an evening out with friends.

“The perfect trip ahead of a very busy (and engagement-packed!) fall.”

Jessica is a very special person in Meghan’s life. Not only they have have been close friends for years, but Jessica has also been her long-time stylist, and she is thought to have played the role of unofficial wedding planner at Meghan and Harry’s big day.

And Jessica’s children were among the protagonist of the ceremony, with Brian and John being cheeky pageboys while Ivy was one of the bridesmaids.

Despite the distance separating the two friends, Jessica is still believed to help Meghan pick her outfits.

Mr Scobie said in another tweet that the £320 Judith and Charles dress wore by the Duchess at yesterday’s charity performance of Hamilton, had been styled by Jessica herself.

He wrote: “Prince Harry & Duchess Meghan (in @JudithNCharles, styled by @jessicamulroney) looking the height of sophistication at tonight’s special performance of @HamiltonWestEnd for @Sentebale.”

Meghan’s trip to Toronto, a city she knows well as was the set of her TV hit Suits, is the first known solo holiday taken by the Duchess since her wedding on May 19.

The Duchess’ schedule is set to be packed with official engagement, with the first coming up as early as September 4.

On that day, she will attend the Well Child Awards.

Two days later, on September 6, she will head to the 100 Days to Peace Gala, in honor of the 100th anniversary of the end of WWI.