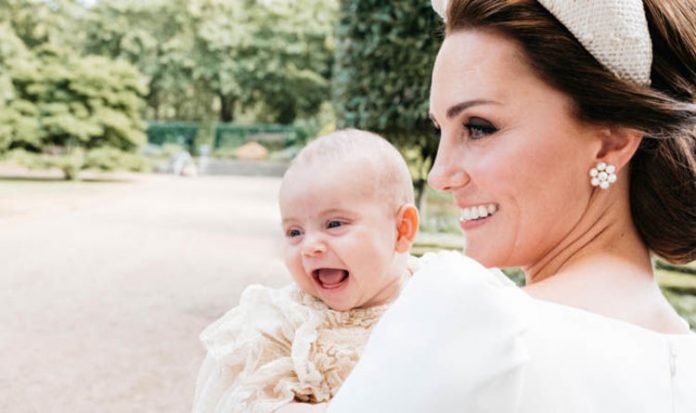 Kate, Duchess of Cambridge, has been on maternity leave since March 22, taking a month to rest and prepare for the arrival of Prince Louis on April 23.

The Duchess, 36, had announced she wished to take a little longer with her third baby than she had with her first two, George and Charlotte.

We most recently saw the whole happy family out together on July 9 for the christening of little Louis, the first glimpse we’ve had of him since his parents showed him to the world outside the hospital on his birthday.

But Kate has mostly stayed out of the public eye since the birth – except for Meghan Markle and Prince Harry’s wedding of course, and at the Trooping the Colour parade in June.

However, these are not considered formal ‘work’ appearances as they are family events.

The day after Prince Louis’ christening, however, Kate attended the centenary of the Royal Air Force alongside other members of the Royal Family.

This was seen as an indication by many that her maternity leave had drawn to a close.

If correct, that means in total Kate took just under four months of maternity leave.

When will we see Prince Louis again?

After the adorable photographs of Louis at his christening, the public wants to see more of the tiny prince.

The Cambridges have not made any formal announcements as to when he will be out and about again.

However, as with his elder siblings, he will likely make more appearances the older he gets.

The new daily of five are currently thought to be enjoying a beach holiday to Mustique in the Caribbean to celebrate Prince George’s birthday.

When the future King George turns five this Sunday, he’ll be enjoying the white sand beaches on the exclusive island.

Mustique has about 100 luxury villas and there is a no-fly zone over the area, which would be perfect for the Cambridges and their young children.

There are rumours that Kate’s younger sister Pippa and her husband James Matthews have joined them, enjoying a ‘babymoon’ before the arrival of their first child.

Kate and Wills had the same idea before George was born, spending a few weeks on the island while Kate was pregnant.

The family have not made an official announcement of the holiday.

However, Kate has a keen eye for photography and has shared some adorable photos of her family with the public, so fingers crossed we’ll get some candid shots of the family of five enjoying their first summer break.