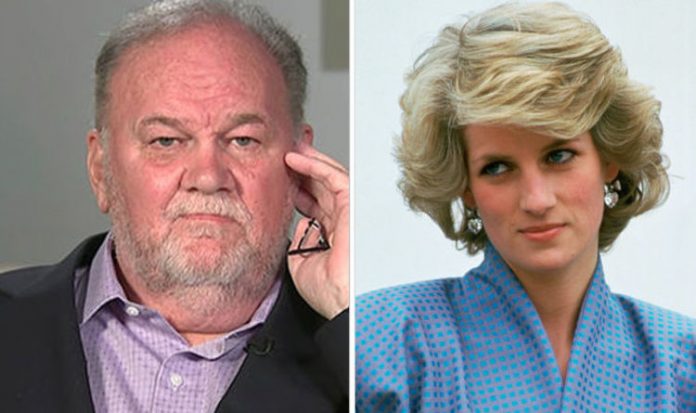 Mr Markle, 74, who has suffered from poor health, even claimed that it might be easier for Meghan if he died.

He has not spoken to her since shortly after he pulled out of accompanying her down the aisle in May.

The duchess’s father has since told of his fears that his daughter is struggling to cope with the transformation from TV star to fully fledged royal.

In an interview he claimed the Royal Family “have Meghan treating her father in a way that Harry’s mother, Princess Diana, would have loathed.

“That’s not what Diana stood for.” He added: “Princess Diana is credited with changing the Royal Family but she wasn’t perfect. She was still very much one of them.

“I think Meghan’s the one who’ll bring them into the 21st century, if they’ll let her.”

Speaking about his son-in- law, he said yesterday: “I don’t care if Harry never speaks to me again. I’ll survive.”

He also criticised the Royal Family, adding: “Who cares these days about a dusty old crown?

“Maybe it’s been polished, but it’s an ancient institution, stuck in its ways.

“Still, I think the Queen has worn that crown rather well, and I think Charles will wear it well too, he’ll be a good king.”

He begged his daughter to get back in touch, saying he will always love her.

“If Meghan never speaks to me again, I don’t know how I can go on without my heart breaking.

“I can see the strain Meghan’s under – it’s in her face.

“I’m really hurt that she’s cut me off completely.

“Perhaps it would be easier for Meghan if I died.

“Everybody would be filled with sympathy for her.

“But I hope we reconcile. I’d hate to die without speaking to Meghan again.”

The duchess is understood to be making plans to visit her mother, Doria Ragland, in Los Angeles this summer.

But she has no plans to see her father, according to reports.