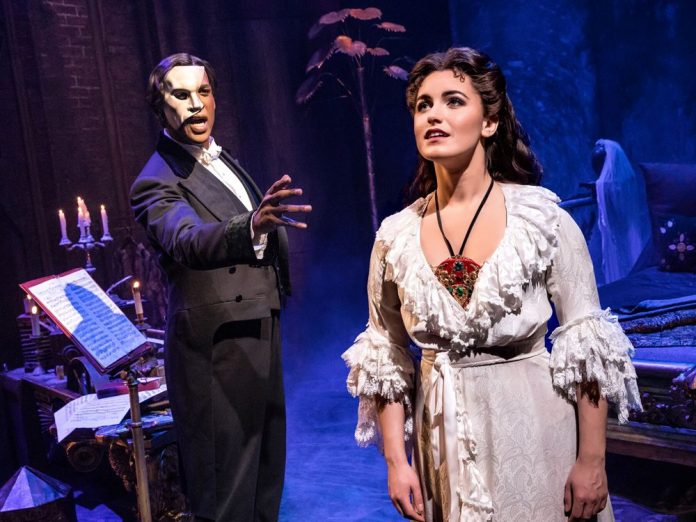 Phantom Of The Opera

If theatre as spectacle is your thing, you can’t do much better than The Phantom Of The Opera.

Cameron Mackintosh’s revised production is a treat for the eyes and ears — all dazzling staging and costumes and all that overwrought Andrew Lloyd Webber music.

The story, of course, is incomprehensible twaddle (book by Richard Stilgoe and Lloyd Webber) — but as Phantom has been running successfully in one place or another for 30 years, it’s probably too late to complain about dubious storytelling.

In its current incarnation, The Phantom of The Opera is a dark psychological study with parallels to Beauty and The Beast.  The tale is set at the Paris Opera, where internecine drama sees the famed diva Carlotta (Trista Moldovan) replaced by a shy ingenue from the dance corps.

Unbeknownst to all, the dancer Christine (Eva Tavares) has an extraordinary singing voice, thanks to a mysterious vocal coach she regards as the ‘angel of music.’

That secret coach is the Phantom of the Opera himself (Quentin Oliver Lee), a shadowy and disfigured genius who hides out in a gothic, underground lair. The mad musician is masked to hide his ghastly face and he travels by secret stairway and gondola (kudos to set designer Paul Brown); a lot of smoke and mirrors —not to mention dry ice, flames and ostentatious chandeliers — are involved in this production, but the theatrics never quite make up for an unsatisfactory story.

READ  Kate still has eyes for her Prince! Duke and Duchess give look of love at Wimbledon | Royal | News (Details)

When the dashing Vicomte de Chagny (Herb Porter on the night we attended) falls in love with Christine and she with him, the Phantom’s jealousy unhinges him.  Only compassion can save them all now, etc.

Despite all the well known drama, some of the more attractive bits in Phantom Of The Opera are comedic, and most of those send up the vanity and intrigue inside a theatre company. The first scene, for example — a dress rehearsal for a fictional opera — is witty and energetic, with the fantastic costume work from the late Maria Bjornson on full display.

Phantom Of The Opera is an extravaganza from another era, so nostalgia cannot be discounted as one of its attractions. The production, directed by Laurence Connor, is at the Princess of Wales theatre through June 30.